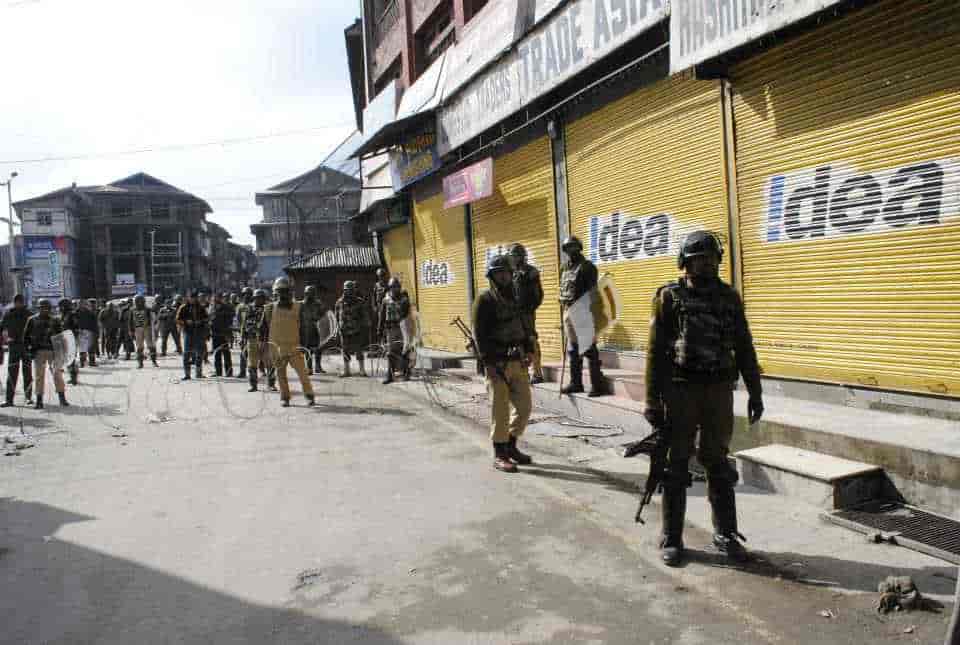 SRINAGAR, India — Thousands of Indian troops fanned out across Indian-controlled Kashmir on Sunday, detaining about 200 separatist activists to prevent protests during a three-day strike to mark the execution anniversaries of two separatists in New Delhi, officials said.

Many parts of the Himalayan region were under curfew, with major roads blocked by razor wire and barricades, as authorities sought to prevent anti-India protests and possible violence, Inspector General Abdul Gani Mir said. Wireless Internet services were shut down.

Authorities detained about 200 known activists and placed their leaders under house arrest, a police officer said on condition of anonymity because he was not authorized to speak with reporters.

Still, a few dozen pro-independence activists chanting “We want freedom” and “Return the bodies of our martyrs” tried to stage a rally in central Srinagar, prompting authorities to haul them in to a police station for several hours, another police officer said on condition of anonymity.

Minor clashes broke out in at least nine other locations across the region, as law enforcement officers tried to stop small groups of people from protesting. No injuries were reported.

Kashmiri separatists, who have long demanded the region be given independence or be allowed to merge with neighboring Pakistan, were incensed last year when Mohammed Afzal Guru was secretly hanged on Feb. 9 in a New Delhi jail for involvement in a 2001 Parliament attack that killed 14 people, including five gunmen.

Most people in Kashmir believe Guru was not given a fair trial, and the covert execution led to days of violent anti-India protests in the Muslim-majority region, where anti-India sentiment runs deep.

The execution refreshed anger sparked in 1984, when pro-independence leader Mohammed Maqbool Butt was hanged in the same New Delhi jail after being convicted of killing an intelligence officer.

Since 1989, an armed uprising and an ensuing crackdown in the region have killed an estimated 68,000 people.

Separatists renewed demands over the weekend that the two men’s remains, buried within the jail compound, be returned to the region for burial.

“The shutdown is called for pressing our demand for return of the mortal remains of our martyrs,” separatist leader Syed Ali Geelani said in a statement issued before he was detained at Srinagar’s airport Saturday after returning from New Delhi.

Kashmir is divided between Hindu-dominated India and Muslim-majority Pakistan, but is claimed by both nations.