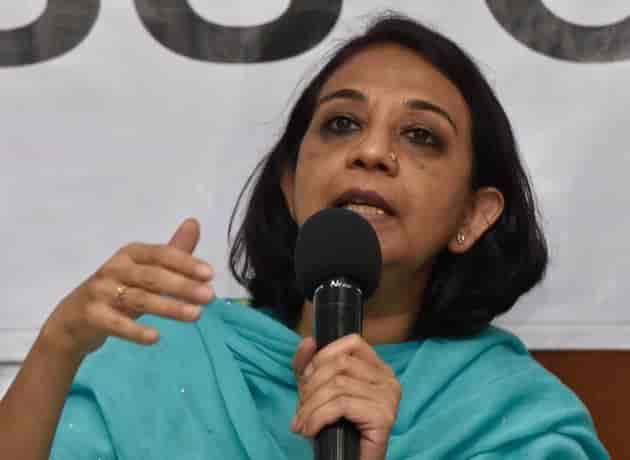 Kashmir Times editor Anuradha Bhasin has alleged that some “goons” entered her government alloted flat and committed theft and stole the jewelry and other valuables from her house.

Ms. Bhasin posted this statement on her social media page :

“Today some goons, led by Dr Imran Ganai, brother of Shehnaz Ganai, former MLC, entered the government flat allotted to me at Wazarat Road (since 2000) and committed theft, stole my jewellery, silverware and other valuables in my house in connivance with Estates Deptt and some police personnel. Few cops in civvies were assisting them in the loot and they were present in every room and tried hiding their faces when I was clicking their photos.

They finally ran away when SHO Pir Mitha Police station came to the area after we called him up. But even the latter was hesitant to lodge our complaint and kept taking the side of the trespassers, wrongly claiming that they are the authorised allottees of the house. My belongings were being dumped in one room and even breakable items were thrown around. We were shoved and pushed and had to fight back in self-defence.

The SHO refused to even enter the house and see how they were looting and throwing my belongings which include my photographs and books. Much later when my lawyer came, he agreed to lodge a formal complaint at the police station and made a visit to the house to see things for himself. The police did not help in evicting him even as Dr Imran Ganai sprawled himself on my bed. In one room they had locked up four girls. We had to break open the door.

One of them started crying when we broke open the door and ran away. In recent years, Shehnaz Ganai and her family members have been allotted more than five flats in the locality. On what basis? Were previous cases also of similar illegal trespassing and theft? Can Estates deptt allot quarters to people without serving show cause notice, informing the previous occupants/ allotees without even waiting for them to remove their belongings. The Estates Dept is promoting theft. Some officers of the police department are willingly turning a blind eye to it.”

Ms. Bhasin also shared the photos from the house when the men had forced their way in and had emptied out the drawers in her bedroom, and were ‘inspecting’ various rooms, even bathrooms, of the apartment.

Previous articleCASO was launched in many areas yesterday, but militants managed to flee: IGP on Pampore attack
Next articleWe reject the humiliation served by Delhi on 5 August: PC senior leaders