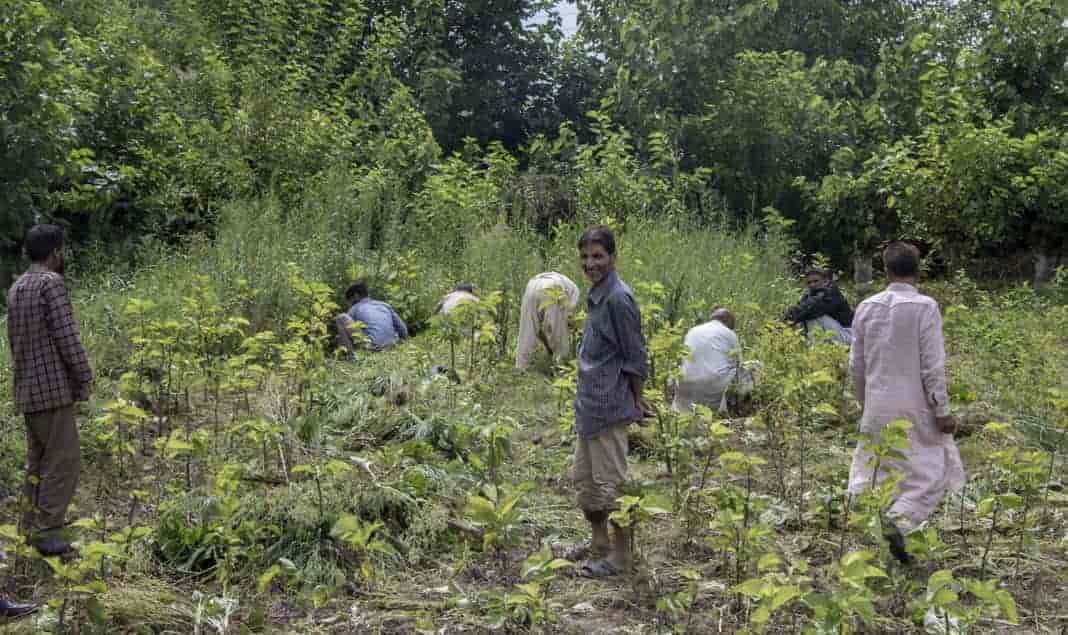 As a few days are left for Eid in Kashmir Valley, the overly crowded markets radiate the fervor of the people preparing for the festival. It also gleams in teenager Rashida’s longing eyes that wait for her brother. Every year she sits on the threshold of her house and waits for her brother, Mansoor, to gift her beautiful toys and dresses.

But this Eid her brother may come empty handed. Mansoor, 29, has been a daily wage worker at Mulberry tree nursery at the historic Solina Silk Factory in Srinagar for years. But now his only source of livelihood faces extinction after the government decided to cut down the nursery to make way for a VIP housing colony.

“I request the government not to snatch bread from our mouth. They are not only planning to axe the trees in which silk moths breed but with this decision, they will also stroke axe on our stomachs,” says Mansoor, a tall lean figure with a notably famished face, who is the sole bread winner of his family with four siblings younger than him.

On 26 April 2018, the then BJP-PDP government led by Chief Minister Mehbooba Mufti passed an order (Vide no. 107-Rev(S) of 2018 – a copy of which is with this reporter) sanctioning the transfer of 92 kanals (11.5 acres) (under the possession of Sericulture department) to the Estates department for construction of residential flats for VIPs, lawmakers, and government employees. The sanctioned land is part of 114 kanals (14.2 acres) of the Silk Factory, on which thousands of mulberry trees have grown for last six to seven decades.

Snatching the workers’ livelihood and soul of the silk industry

The nursery at the factory provides quality mulberry saplings for distribution to other parts of Kashmir among the relatively poorer sections of the society. “We distribute 20-25000 saplings mainly in Anantnag, Kishtwar and Kupwara among the needy. By this initiative, they are able to make 40000 rupees ($570) by the end of the summer season that emboldens them economically,” says a senior official of the Sericulture Department in Srinagar, requesting not to be named.

“The government has already taken huge part of land from the Sericulture Department to build flyovers nearby Solina. The seizure of the already limited land again will create massive unemployment in Kashmir,” says Nazir Ahmad, President of Sericulture Workers’ Association.

Ahmad feels that the menace of joblessness in Kashmir has already taken grounds. Now, the decision to chop down the trees at Solina will directly impact 10,000 families to which the saplings are distributed; and 5000 daily wage workers at the nursery.

“When I went to receive my salary I was told that this could be my last wage until the final decision is made about the land. I’m devastated. I don’t know how to break this news to my family,” adds Mansoor, in a questioning tone.

He like many other daily wagers who put all their sweat to nurture the lush mulberry nursery are dreaded by the decision. The cabinet order to utilize the area for the residential purpose makes the workers and tillers feel endangered.

Instead formulate plans to restore glory of silk industry

Captivated by the potential of Kashmir to procure high quality silk, the Britishers first laid the foundation of the silk factory in 1897. The industry generated employment for 60000 people and the profit stood at staggering 12,50,000 rupees in 1919. By then, Kashmir became the largest producer of silk in the world. But by 1990 most of the production stopped and it was only in July this year, part of Solina Silk Factory were reopened again for processing cocoons and reeling silk.

Rai believes that the government needs to formulate a proper plan by bringing in the multi-disciplinary professional team to evaluate the entire site. This will further help to revitalize the usable parts and forsake the wasteland.

“We have been pleading the government not to seize our land as thousands of workers’ daily bread comes from this industry,” says a an official of the Sericulture Department at the Solina factory, as he wipes out the sweat from his forehead. He feels that it is not the business that will get affected after this decision but the age old legacy of silk that the Valley has been endowed with, will get a final blow.

The changing climatic condition and government’s lack of interventions to revive the industry has already pushed the once thriving silk industry into an abyss. And this bizzare government order to construct a housing colony around the factory could be a death nail for the industry.

The revival of Solina Silk Factory in 2018 was led by Shailendra Kumar, Commissioner Secretary, Industries and Commerce, with an initiative to augment the crumbling foundation of the silk industry in Kashmir. After the land transfer order came to light, Kumar believes that the cutting down the heritage nursery will have impact after over a decade, as one can’t build it again but today the impact will not one silk production.

“The nursery provides mulberry saplings to all the small nurseries across Kashmir,” says Kumar. “So the raw materials we receive at the factory is procured from all parts of Kashmir. No doubt construction at the nursery will affect the employment of the daily wage workers but the amount raw materials that is being supplied to the silk industry will remain undeterred nonetheless.”

The site at Solina is divided into three parts, as Kumar says, one area is with the Excise department, another has the Silk Factory and the third is with the Sericulture Department. Among the 114 kanals of the mulberry nursery, the government order will now leave only 22 kanals (2.7 acres) of land.

“If they strike the mulberry trees down, where the silk worms breed then they can’t expect the worms to breed in Chinar or Poplar trees. It is simply corrupting the natural setup of this place,” says Mohammad Ramzan Khan, tall man with sunken eyes, who works in the mulberry nursery.