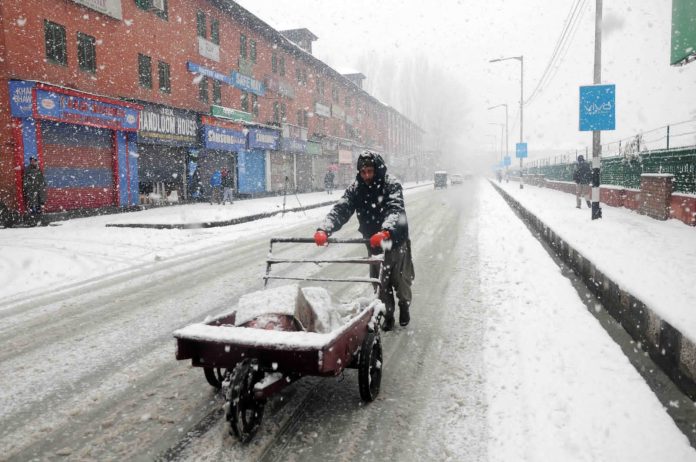 Weatherman on Tuesday issued an ‘orange alert’ as present weather system of snowfall is expected to “intensify”.
The weather office has already issued an advisory for snowfall in J-K till 9 January.

“As expected, weather is overcast in both J-K with widespread light rain/snow and moderate snow over higher reaches,” an official of the MeT office said here told GNS.

“Present weather is likely to intensify as the day progresses. Expect Moderate Snow/Rain in plains and Heavy Snowfall over higher reaches with main activity later tonight and tomorrow in both Jammu and Kashmir.

The weatherman has issued ‘amber/orange warning for “isolated heavy snowfall”.
There are four types of colour codes signifying the level of caution: green which means no action, yellow—situation to be watched), amber –government agencies need to be prepared for severe weather and red –action needed by the agencies.

The weather office has urged people not to venture out on avalanche and landslide prone areas, unless extremely necessary. “Keep power/light backup( in case of power failure),” the MeT office said, adding,”Drive very slowly and in low gear while driving on snow bound area.”

Under the influence of these weather systems, the weatherman said that widespread moderate rain and snow was expected in Jammu, Kashmir and Ladakh regions. “Light rain/snow would commence at a few places of Kashmir from 3rd January evening and thereafter increase in intensity and distribution,” reads the advisory, adding, “Main activity of this system will be occurrence of moderate to heavy rain/snow, most likely during 5th and 8th January and gradual decrease thereafter.”

The system is likely to cause heavy rain and snow mainly in Pirpanjal Range of Jammu Division (from Bhadcrwah to Banihal), upper reaches of Kashmir (Gulmarg, Sonamarg, Baramulla and Kupwara , and Drass subdivision in Ladakh.

Regarding probable impacts, the weather advisory says that there may be disruption of surface and air transport including Jammu- Srinagar Highway, Srinagar-Leh Highway (Zojila Pass), Leh-Manali, Mughal Road, and Sadhna pass.

“(there are) chances of snow avalanches and landslides in vulnerable areas besides disruption of power supply in hilly areas.”
There may be water logging in low lying areas besides further dip in day temperatures, it said.