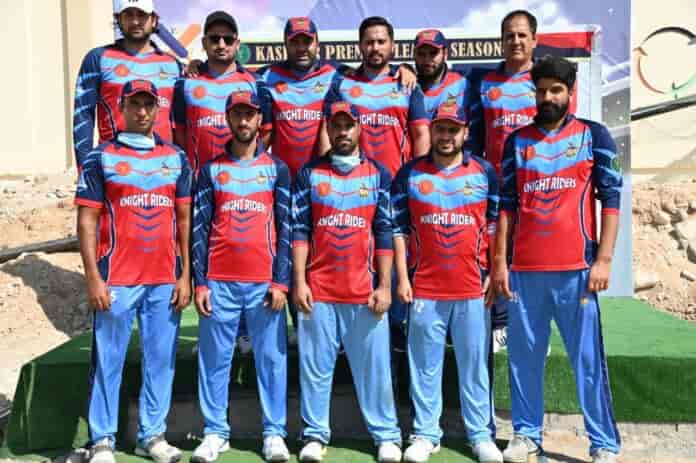 For two months, four teams of the Kashmir Premier League battled it out in the scorching heat of Abu Dhabi.

And it all came down to the final showdown between Kashmir Knight Riders and Nigeen Aces at the lush Volcano Cricket Ground in Shahama, Abu Dhabi, a press release said.

Adding that the first season of the Kashmir Premier League has been a great spectacle of team camaraderie, some excellent team and individual performances and most importantly the coming together of Kashmiri community to stage an amazing sports event.

“In the final, Nigeen Aces won the toss and elected to bat first. Things didn’t go their way as they lost four quick wickets and were left teetering at 43/4 after 8 overs.”

A retrained innings of 34 (30) by the otherwise flamboyant captain Aaqib Naqati and significant contributions by the lower order helped Nigeen Aces reach 122/9. Kashmir Knight Riders bowlers bowled a nagging line and length which didn’t allow the Aces to play their natural cricket. Ibrahim, Arif and Yasir were the pick of the bowlers with 2 wickets each, the statement added.

Having restricted the Aces, it was now up to team KKR to finish the job, given their strong batting lineup. KKR started well and looked on course before a freakish run out sent Anayat back.

This opened the doors for Aces, who reduced KKR to 31/5 in 7 overs, thanks again to Aaqib, who was leading from the front. What followed was the gamechanger as Aamil 42 (40) and Wasim 19 (21) anchored the innings and played some risk-free cricket.

Their 51-run partnership seemed to have settled the nerves in the KKR camp. However, some excellent bowling by Omer Farooq and Aaqib towards the death turned this game of swinging fortunes into an even contest with 11 required of the last over and 2 wickets in hand.

Abid ensured there was no more drama as he stepped out hit one out of the park. Aamil was declared man of the match for his contributions with the bat.

Inayat Fazili, one of the founders of KSL Dubai, was the Chief Guest at the presentation ceremony. He said, “These events spread the message of love, enrich the culture and bring new opportunities for Kashmiri youth in UAE”.

He along with the Kaeshur Cricket Club (KCC) management distributed the mementos among teams. Fazili was all praise for KCC for organizing events like these that bring Kashmiris closer and make them feel at home away from home.

A CRPF sub-inspector was injured after militants hurled a grenade towards CRPF bunker near Ali Masjid Eidgah area of...
Kashmir