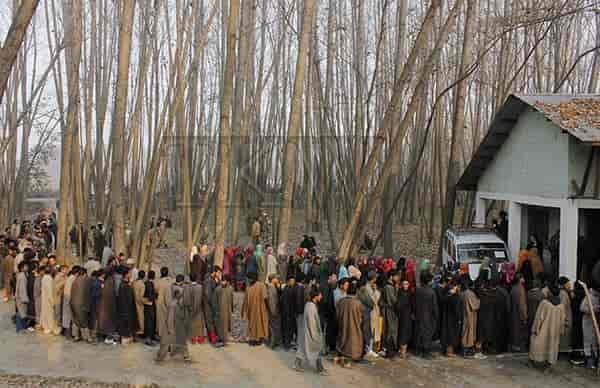 Polling had to be suspended for few minutes at Tulmula, Gund, Kulan, Ganiwan and Kurhama Ganderbal after workers of NC and PDP clashed over counter-allegations of booth capturing, forcing the authorities to suspend voting. Activists of both parties tried to manhandle one another in the premises of polling booths while some of them hurled fire pots (kangris) at each other.

Notwithstanding the freezing cold and the fear of the separatists, the trickle of voters at polling stations across the 5 constituencies in Kashmir Valley continued. The crowds were increasing as the day progressed. The statistics too spoke of the voter enthusiasm.

A police official told a news agency that the high voter turnout was significant given the boycott call of the separatists and the fear of violence in the region. People clad in woolens and holding kangris (traditional earthen firepots woven over with willow reeds) were seen queuing up outside polling stations in Bandipora and Sonawari in the Valley right since the morning.

Separatist leaders, many of them jailed during the run-up to the vote, along with thousands of other people, had asked people in the Kashmir Valley to boycott the polls. Hurriyat Conference, the main separatist group, had even called for a shutdown in Bandipora and Sonawari against the elections. But adequate security at all polling stations ensured there was no effect of shutdown call.

Dotting every road in the Kashmir valley were armed paramilitary troopers and policemen. All entry points to these five constituencies were under check. There was a lot of enthusiasm among voters in Sonawari, Kangan and Ganderbal Constituencies. “I cast my early in the morning with a hope that this time a better government gets formed which could address the problems of the people,” said Muhammad Ahsan, a resident of Gund Kangan.

Till afternoon, most of the voters who were standing in the queue were mostly women. “We want change. We will vote for change,” a group of women voters told the news agency at Kurhama pooling booth. Another group of voters however added that their vote is not against Hurriyat but for change only. “Please don’t misunderstand us. We are with Freedom Struggle while our vote is only for change and to get our daily problems addressed,” they added.

– Given by the Chief Electoral Officer – Umang Narula.

Two LeT militants arrested along with cash and ammunition in south Kashmir: Police