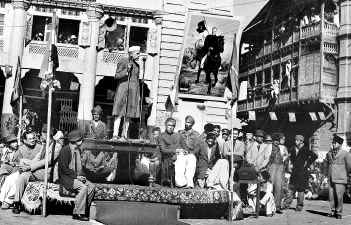 I spoke again about Kashmir the other day at SOAS, the School of Oriental and African Studies, in London. I have lost count how many times I have spoken about Kashmir. I am not Kashmiri but for over thirty years I have been involved in trying to understand the complexities of an issue which affects the lives of all the inhabitants of the once Princely state of Jammu and Kashmir and the region.

My audience was the Kashmir Solidarity Movement  – formed by some young students who are living in Britain but of ‘Kashmiri origin’. They had heard about the longstanding dispute between India and Pakistan over  Jammu and Kashmir and wanted to know more about it, to understand why the dispute continued and what, perhaps, could be done to resolve it.

As I looked at my listeners I realized that none of them were born when I first visited the valley of Kashmir in 1981, when I first made friends with Kashmiris, heightening my awareness of the human dimension of the issue. This stark realization made me think again how tragic it is that generations are brought up on conflict and how wonderful it would be if, one day, future generations could be born when there is no conflict.

But we are a long way from that ideal and my task at SOAS was to explain to these young students some of their history. I chose to focus on three ‘turning points’: the first was 1846: when according to the terms of the Treaty of Amritsar, the British ‘sold’ the valley of Kashmir to Raja Gulab Singh, elevating him to the status of Maharajah of Jammu and Kashmir;  the second was 1947 when the independence of South Asia was effected, creating the new dominions of India and Pakistan but with the fate of Jammu and Kashmir undecided; the third was 1987 when rigged elections were held in the Valley of Kashmir, setting in train a movement of armed protest against the Indian government and reviving the feeling that the political future of the state  has always been subject to an alien authority.

Why, I am   often asked, did the British ‘sell’ the valley of Kashmir? How did they have the right to do so? To understand this event, we have to go back in history. Britain in the nineteenth century was at the height of its imperial power, but its authority in India was being challenged by the rising power of the Sikhs of the Punjab.  As a matter of expediency the British decided to prise Raja Gulab Singh away from his allegiance to the Sikhs – and how better to do so than to offer him status as a Maharaja in his own right? Up to that time, as a liege lord of the Sikhs, he had only been administering the valley of Kashmir and the surrounding lands including his native region of Jammu on behalf of the Sikhs. Provided he did not join forces with the Sikhs against the British and that he paid the requisite sum of money (Rs. 75 lakhs) – with which the British could then pay their soldiers – he would be rewarded. And, as far as the British were concerned their decision was well founded. When, a decade later, the Indians rose up in their first war of Independence in the 1857 mutiny, Gulab Singh remained loyal to the British; he did not fight against them.

But the fact that the valley of Kashmir was ‘sold’ – including of course its inhabitants – has been a longstanding grievance. I remember hearing Jammu Kashmir Liberation Front (JKLF) leader, Yasin Malik, angrily proclaim at a meeting in the House of Commons in London  – ‘we are not cattle that we should be sold’. And so when understanding the Kashmir issue, it is possible to say that the ‘sale’ of Kashmir signifies the beginning of the pain that many Kashmiris feel – that their political future and allegiance was decided without their consent.

The independence of the subcontinent is another turning point. According to the British ‘partition’ plan – all the rulers of the Princely states – well over 550 were allowed to decide which new Dominion they should join:  whether their states would be best served by joining the new Pakistan, created as a homeland for the Muslims of South Asia, or by remaining as part of India. For most, geography determined their decision. But for Maharaja Hari Singh – a descendant of Gulab Singh – his state was geographically contiguous to both India and Pakistan. And so he did nothing, perhaps hoping that he might be able to retain the state’s independence.

This crucial indecision cost the inhabitants of the state dearly. Populated by Muslims, Hindus, Sikhs, Buddhists there was no obvious unanimity of allegiance, the territory itself fractured between sparsely inhabited Ladakh, predominantly Hindu Jammu, the predominantly Muslim valley, and the entirely Muslim regions of Gilgit, Baltistan, Mirpur, Poonch and Muzaffarabad. Hostilities immediately erupted, resulting in the Maharajah’s hurried decision to join India in return for military assistance, which in turn led to war between India and Pakistan, both fighting to retain the entire state within their frontiers. When a ceasefire was arranged in January 1949, two-thirds of the state remained under Indian administration, one-third under Pakistani- administration – a status quo which exists to the present day, the promised plebiscite or referendum, which was supposed to confirm or reject the Maharajah’s accession to India, never held.

The elections of 1987 in Indian-administered Jammu and Kashmir proved a catalyst. They triggered an insurgent movement against the authority of the Indian government reviving all the pent up feelings of the past forty years – that the inhabitants of Jammu and Kashmir had not been given their right to choose their political allegiance – that they had been deprived of their right of self-determination, which for an increasing number now meant independence in preference to union with Pakistan. No matter that elections to  the state’s legislative assembly  had been held, that some  Muslims were content with their status as part of the Indian Union, no matter that non-Muslims living in the state were also content, the insurgency signified the culmination of years of frustration: that the dispute over  Jammu and Kashmir’s future had never been formally resolved  and that long-standing grievances had not been sufficiently addressed.

One of the most revealing interviews I held while writing my first book on Kashmir – published nearly twenty years ago in 1996 – was with former Prime Minister I.K. Gujral when he repeated a conversation that he had witnessed between former Prime Minister Indira Gandhi and the then Chief Minister of Jammu and Kashmir, G.M. Sadiq in 1968. ‘India spends millions on Kashmir but very little in Kashmir.’ Sadiq said to Gandhi. ‘If I were to tell you that the law and order situation requires on more division of the army, you would send it, without the blink of an eye but if I ask you to set up two factories, you will tell me twenty reasons why it cannot be done and therefore what do our youth do?’

So where does that leave us in 2015? Nearly forty years since the insurgency began, with thousands having died, disappeared or orphaned in the name of Kashmir? Stuck in a time warp of rhetoric about Jammu and Kashmir which has little relevance to the present day, on the threshold of a new insurgency, on the threshold of peace, or exhausted and out of options? As a student of Kashmir’s history over the past thirty years, I remain convinced that the inhabitants all want peace. They want to be able to live their lives in dignity and self-respect. They want good governance and the rule of law, to be able to speak freely, to travel freely – to live the sort of lives we are privileged to live in Europe and the United States. They want to prosper, they want jobs, security for themselves and their families. Most importantly, they want the region demilitarized so that they do not always feel under the watchful eye of what feels like an occupying army, which can act with impunity. The challenge today, in the light of so much history, is how to achieve that peace.