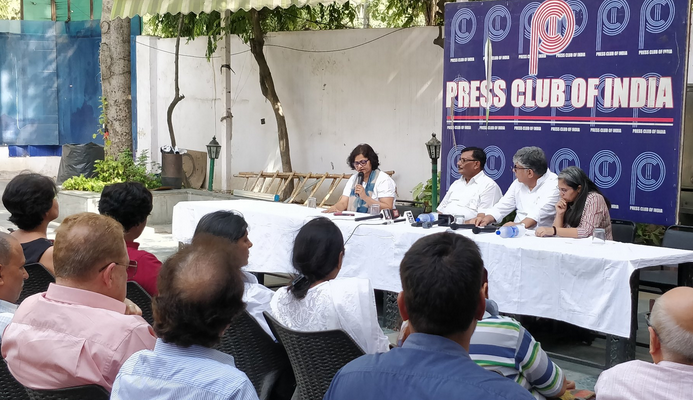 Various journalists across India held protests against the killing of Shujaat Bukhari, the founder and editor of Rising Kashmir newspaper, who was shot dead outside his office on last Thursday.

Bukhari was leaving his office in Press Enclave in the city centre Lal Chowk for an Iftar party when he was shot multiple times, officials said. He was given police protection since an attack on him in 2000. In the attack, two of his Personal Security Guards were also killed.

At the protest, Siddharth Varadarajan, founding editor of The Wire said, “Long before Shujaat Bukhari assassinated, he was vilified on social media on both sides of the divide,” said

“If there is one thing we can take away from this is stop the labeling, no matter what our political views are. We might disagree but we need to learn to empathise,” said Nidhi Razdan, executive editor of the NDTV.

If there is one thing we can take away from this is stop the labelling, no matter what our political views are. We might disagree but we need to learn to empathise. @Nidhi pays her tribute to #ShujaatBukhari. pic.twitter.com/j5i111Zy3l

A group of eminent journalists also gathered in Chennai to protest against the assassination. “Shujaat Bukhari was a messenger of peace,” said Vidya Venkat, senior Assistant Editor at The Hindu.

#ShujaatBukhari was a messenger of peace and everyone remembered his bylined reports in @the_hindu says @dsureshkumar at meeting to condemn his killing at #Chennai Press club pic.twitter.com/p0QaBzFXh0

Several journalists also gathered to protest against the killing in various other parts including Udaipur and Kolkata.