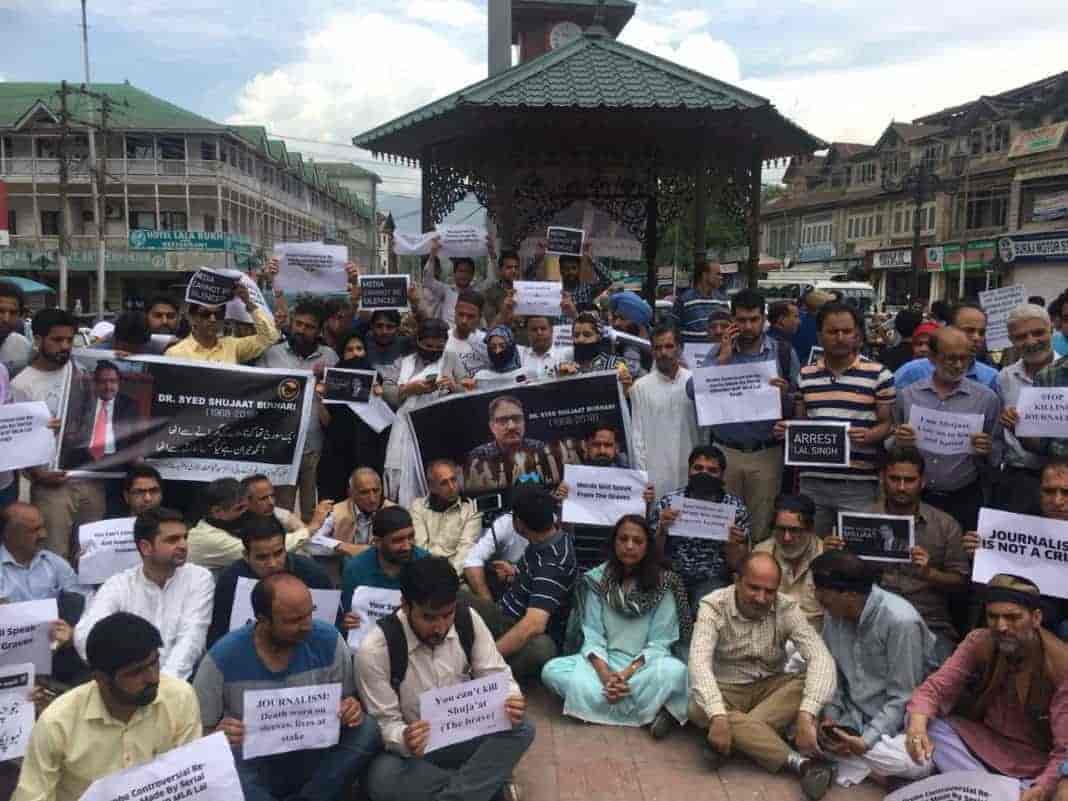 Journalists from the valley, owners of various newspapers, and a few non-local writers held a peaceful march against the brutal killing of Rising Kashmir’s founding editor, Shujaat Bukhari and ousted BJP Minister Lal Singh’s threat to valley based journalists.

Journalists marched with black cloth covering the mouth, as a sign of protest, from Press Enclave, Lal Chowk to Ghanta Ghar where they sat, displaying placards that read, “We seek justice for Shujaat”, “Bring Shujaat’s killers to justice”, “I am Shujaat”, “Arrest Lal Singh” and few other quotes how journalism is being choked in Kashmir.

Journalists recalled their memories with Bukhari with most of them saying, “We cannot register the fact that he is no more. It seems like he is gone for a long trip.”

BJP MLA Lal Singh, who was the Forest Minister in the cabinet of Mehbooba Mufti, addressing the press in Jammu said, “They (Kashmir’s journalists) have created the wrong atmosphere about the whole case. Now, I would like to ask them to draw a line of journalism and think about how to live.”

“At that time Shujaat Sahab also received a call. I decided to stay in office. As soon as I climbed the second stair, I heard a sound similar to firecrackers but they were bullets,” says Umar, a colleague of Bukhari in Rising Kashmir.

Bukhari was assassinated on June 14 by unidentified gunmen outside his office in Srinagar, a day before Eid and few minutes before Iftaar (breaking of Fast during Ramzan). Bukhari succumbed to his injuries and was declared brought dead at the hospital.

The Committee to Protect Journalists has also strongly condemned the killing of the editor said that Indian authorities must bring killers of Bukhari to justice.