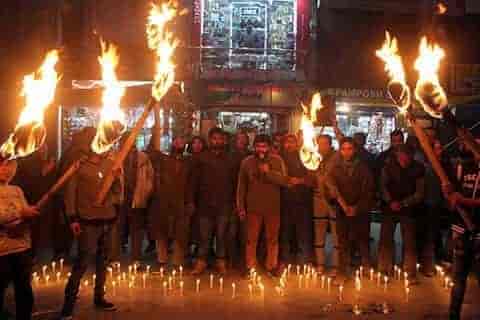 Srinagar: “Ongoing military and police oppression in Kashmir especially in villages of south and north Kashmir, choking of every little space on peaceful political dissent, crackdown against Jammu Kashmir Liberation Front (JKLF) leaders and activists are a few examples of what India is unleashing against people of Kashmir,” said the JKLF leaders today while leading the candlelight protest programs here.

According to a statement issued here, the leaders said, “If subjecting populace to military and police oppression, choking of political space and putting political dissent behind bars is a democracy, then what dictatorship in the eyes of Indian rulers is?”

The JKLF leaders and activists staged peaceful candlelight protests at Maisuma, Abi Guzar and Soura Srinagar against “ongoing military and police crackdown” in Kashmir. The call for this week-long protest has been given by JRL on the occasion of the International Human Rights Day.

Holding candles and torches in their hands, the protesters marched peacefully and raised slogans against “ongoing human rights abuses” in Kashmir, the statement said. (GNS)