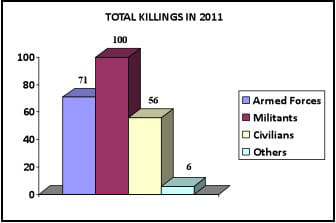 This is a report released by the JAMMU AND KASHMIR COALITION OF CIVIL SOCIETY, the Bund, Amira Kadal, Srinagar 190001, (www.jkccs.net)

Year 2011 has just passed, and many have declared this year, a peaceful year in Jammu and Kashmir. Ofcourse assertions of peace by various quarters are relative. Enforced silence cannot be construed as peace. Despite the hype of peace, people of Jammu and Kashmir have witnessed unabated violence, human rights abuses, denial of civil and political rights, absence of mechanisms of justice, heightened militarization and surveillance. The figures of violent incidents suggest that 2011 as usual has been the year of loss, victimization, mourning and pain for the people.

In 2011, a total of 233 people have lost their lives due to violent incidents in Jammu and Kashmir. Out of 233 persons, 56 were civilians, 100 were alleged militants, 71 armed forces personnel and 6 were unidentified persons and counter insurgent renegades.

This year has been very significant for those struggling against the human rights abuses in Jammu and Kashmir. It is for the first time a state institution like State Human Rights Commission (SHRC) endorsed the findings of Association of Parents of Disappeared Persons (APDP) and International People’s Tribunal for Human Rights and Justice in Kashmir (IPTK) regarding the presence of unmarked graves and mass graves in north Kashmir, besides acknowledging the possibility of burial of some of the people subjected to enforced disappearances in these unmarked graves and mass garves.

The year 2011 has not been free of custodial killings and fake encounters. 7 persons were allegedly killed in custody. In all the cases of custodial killings, the government has failed to either prosecute or conduct an impartial conclusive investigation. Whether it was the killing of Ashok Kumar, a mentally challenged person who was killed in a fake encounter in Surankote, Poonch or the killing of Nazim Rashid of Sopore who succumbed to custodial torture or the custodial death of ruling National Conference party worker, Mohammad Yousuf, who died after he was handed over by the Chief Minister to the Crime Branch officials, the practice of impunity is consistent. No credible investigations have been carried out, thus creating space for cover ups, which otherwise also is the norm in Jammu and Kashmir.

JKCCS on 4th August 2011, had filed an RTI application for seeking information regarding the investigations being conducted in the killing of Nazim Rashid of Sopore, but so far the Jammu and Kashmir Police has failed to provide the information.

In 2011, the government has ordered 8 different probes on various human rights abuses. So far no probe has yet yielded any results, which is nothing unprecedented as even in the past probes have been announced by the government to neutralize the public pressure. From 2003 to 2011, different governments have appointed 151 probes but justice remains elusive.

It appears the basic objective of the government to appoint probes is not to convict perpetrators but to only deflate the public anger. If perpetrators would have been punished as a result of meaningful and effective probes in the past, it would have helped in creating deterrence for the recurrence of these crimes. We urge the government to ensure that investigations and probe should not be politically motivated, but aimed at holding the perpetrators accountable.

Somehow government was very quick in probing the death of Molvi Showkat Ahmed Shah, which is a welcome step, but investigations into the killing of 7 other civilian political workers have not yielded any results so far.

JKCCS demands an impartial and independent investigation into all the killings of civilian political workers. Impartial investigations would help bringing the perpetrators to justice and also act as a deterrent.

Suicides and fratricides by the personnel of the Indian armed forces, continues to exist as an issue in the year 2011. This year 15 armed forces personnel committed suicides in Jammu and Kashmir due to unknown reasons and another 9 were killed in fratricidal incidents of violence.

The paranoia of government regarding the summer uprising of 2010, was very evident this year in the actions taken by the government. Even in 2011, when there was no apparent street uprising, hundreds of boys were detained on the pretext of being stone pelters. These young boys are subjected to torture, intimidation and harassment. In many police stations boys are illegally being detained; sometimes for few hours and sometimes for few days. Some boys are regularly being called to police stations on one pretext or the other. There is complete disregard towards the juvenility of the boys being detained. This year many minors were arrested on charges of stone pelting.

In some cases people alleged that police officials have been demanding ransom for releasing these boys who were illegally detained in various police stations.

State Human Rights Commission (SHRC) passed a judgment on the Kunan Poshpora mass rape case of 1991, demanding re-opening of the case and also filing a case against the then Director Prosecutions. It is for the first time a government institution has acknowledged this mass rape incident. It took state 20 years to acknowledge the crime and it isn’t clear how long government will take to convict perpetrators.

This year in Kulgam area of south Kashmir, there was an allegation of rape, where a woman alleged that she was raped for 2 days. The way police conducted investigations into this case and also kept the family literally under house arrest, raised more suspicion against the government.

Fear and social stigma makes it difficult for the victims to report the rape or molestation cases. One such case, by coincidence came into the notice of JKCCS in north Kashmir this year where the rape victim did not want to report her victimization. In the month of February a woman (identity withheld) from north Kashmir was allegedly raped in police custody infront of her husband. The husband was kept under detention as a hostage so that his wife would not report her case. The woman did not want to file complaint as she had no hope of getting justice and also was worried that by filing the case she would endanger her husband’s life.

Government of India has been claiming that despite the imposition of AFSPA, mechanisms of justice are functional and deliver whenever anyone is found indulging in human rights abuses, but facts provided by the state institutions this year contradict the claim of the Indian state.

Above facts reveal that the provision of sanctions for prosecution under AFSPA is a fig leaf and the truth is that there is 100% impunity for the soldiers operating in Jammu and Kashmir.

This year there have been voices raised by politicians regarding the revocation of AFSPA, which is also aimed at generating an impression that human rights violations will end by the revocation of AFSPA. The fact is that Jammu and Kashmir Police has been an equal partner in crimes committed on the people. The Jammu and Kashmir Police personnel also have been responsible for a huge number of human rights abuses.

The armed Village Defence Committees (VDCs), Special Police Officials (SPOs), and the counter insurgent government sponsored militias like Ikhwan have also been responsible for perpetrating heinous crimes. Which law allows the creation of these groups? Which law encourages them to perpetrate human rights abuses? Which law sanctions their impunity? It is the law of lawlessness.

Revocation of AFSPA from some areas would not help in ending the human rights abuses as the sense of immunity in the soldiers is not derived from laws but from the political culture of impunity, for which State Government and the Government of India are largely responsible.

The government should help the processes of justice and help prosecute officials accused of human rights abuses. The mechanisms of justice which have been forced to not function by the government should be empowered to punish the guilty, which would be a meaningful confidence building measure for the people of Jammu and Kashmir.

We urge the Government of India to end the culture of impunity and not just AFSPA from Jammu and Kashmir.

KILLINGS DUE TO UNEXPLODED SHELLS AND LANDMINES

This year 8 persons have lost their lives in explosions, which were caused due to unexploded shells used during counter insurgency operations and 1 out 8 deaths was reported due to landmine explosion.

ROLE OF INSTITUTIONS OF JUSTICE

State Human Rights Commission (SHRC) has tried to assert its existence by passing some very significant judgments this year. Prominent amongst the cases where SHRC passed the judgements was the case of unmarked graves and mass graves in north Kashmir, Kunan Poshpora mass rape case and the plight of prisoners languishing in various jails across Jammu and Kashmir. Besides these judgments SHRC has been actively helping in the cases to provide ex-gratia relief.