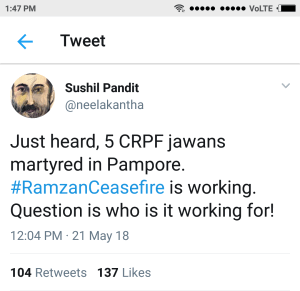 Sushil Pandit is being booked by police for spreading rumours and fake news. Pandit tweeted on his account @neelakantha, “ “Just heard, 5 CRPF jawans martyred in Pampore. #RamzanCeasefire is working. Question is who is it working for!,”

The police said it took cognisance of the matter when it observed that tweet amounted to an offence under law.

In the statement issued, the police said, “Police said it has registered a case in this matter at Police Station Pampore under FIR No. 49/2018 under section 505 RPC,”

Police added that the investigation in the case has been initiated.