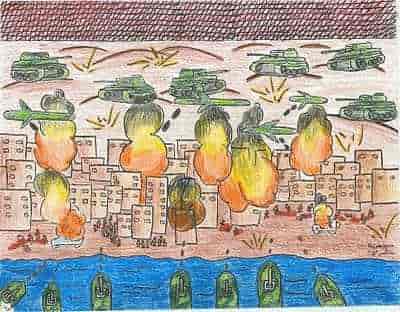 It breaks my heart. Images of a toddler burnt to death by an Israeli hell-fire missile, being held aloft by her father, is the worst thing that can happen to you on a weekend. The spectacle of ugliness that Israel has let loose in Gaza this week proves one thing: That no matter how much we progress as individuals and societies, no matter how advanced we grow in science, technology and arts, no matter how much we evolve culturally — at a fundamental level humans have a tendency to be merciless, evil and wicked.

I do not wish to get into a blame game. It is not for me to decide who provoked whom in this latest orgy of violence although it is there for everyone to see. Taking lessons from history is passé. Talking about agreements and accords and reconciliation is what losers do. In a real world the mighty smack the weak real hard and then slowly look up to see whether the onlookers – the civilized and the democratic world – meet their gaze or look the other way. As we have seen in the last few days, the moral sense, that still small voice in us is dead. We simply look away.

This is a disproportionate fight. A war takes place between two equals. Hell fire missiles and cluster bombs dropped from an Israeli F-16 Fighting Falcon or a Boeing F-15E Strike Eagle on a crowded alley in Gaza is not an act of war against Hamas. It is a crime against humanity. You can’t hoodwink the world into believing that we knock on the roof of a building by a warning bomb and then pierce the daylights out of the petrified inhabitants in less than a minute. This is no war. This simply is the basest form of barbarity on display.

What shocks you is not the mass murder of children, women and the elderly that Israel gets away with. For that matter there are the world’s nutcases and non-state actors like ISIL, TTP and other such monstrosities who have slayed people without mercy. Here it is the sheer audacity with which a state that is recognized by the UN and 160 countries goes onto a territory and systematically kills whoever they want to, blowing little children into smithereens, as if they were target mannequins, in full view of world media, and then behaves as if it were the victim. The sanctimoniousness of Israel shocks you.

It is like that Aesop’s fable where the lamb is drinking water downstream while the wolf stands upstream. In a mood to finish off the poor thing, the wolf walks upto the lamb and accuses it of making the water unclean. “But sir, I am drinking downstream”, the lamb respectfully suggests. At this the wolf loses patience and hollers that the lamb’s offences must have been committed by someone in his relation and that it does not propose to delay its meal by enquiring any further. It promptly lunges at the lamb and eats it. The unjust, raconteurs say, never listen to innocents.

In an ideal world, the degree of apartheid, blockades and blatant racism that Israel practices against the people of Palestine should have earned it a place in infamy. Like the apartheid-era South Africa, all nations of the world should have boycotted Israel unless it would stop treating fellow human beings like sub-humans and give up their racial ideology. But in a real world you have the Zionist state’s spin doctors making you believe that this is a Hamas-Israel war with the big daddy — United States — ready with a veto at the UN.

In reality everyone has failed the poor Palestinians. They just have raw courage and their catapults and scarves. And a universal solidarity against some of the planet’s meanest, cruelest and the most abominable war-machinery.

It is Ramadhan. This is usually the time for piety, contemplation and mercy. It is so very infelicitous that while the rest of the world celebrates the goodness of this holy month, the people of Gaza have to endure missiles and death at Suhoor and Iftar.

Our prayers and thoughts with the brave men and women of Palestine. Your suffering invokes a very private pain in Kashmiris and other subjugated peoples.

May your valor outlast the injustice.