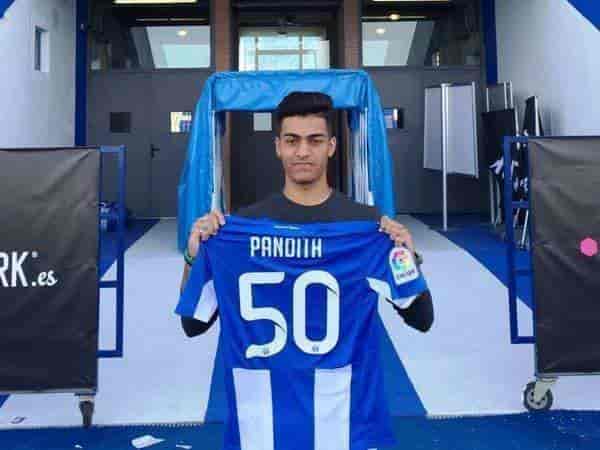 When Ishan Pandita, then 17, signed the contract for LaLiga side Leganes’ U-19 squad in October 2016, he became the first-ever Indian footballer to sign for a Juvenil A side, the top tier of youth football in Spain.

However, despite attracting interest from various Segunda division – Spanish 2nd tier – sides, the 21-year-old remains out of books in India. The Bengaluru-based striker has spent nearly five years in Spain, to nurture his skills; but his absence in the national scene is more surprising given how the country is yearning for a striker to replace the ageing captain Sunil Chhetri.

But in Spain, now Mr. Pandita is at crossroads; before the pandemic hit the European country, he had offers from two Spanish second division sides. Now, as all the football matches come to an uncertainly long halt, Mr. Pandita might be forced to return to India.

In Spain, he was playing for Lorca FC, which has produced three Indian Super League exports including current captain Gabriel Cichero.

“I didn’t initially want to come back because things were going good; it had taken me a long time to get used to the country’s football culture and pace, but I was finally there,” Mr. Pandita told Sportskeeda. “Now with the situation getting worse every day, I might have to return to India and I am considering playing either in the I-league and ISL for a year if the situation doesn’t get better.”

“If you ask me, the pace here is way faster; not to undermine the Indian league,” he added, “but I can feel I’m getting better and opportunities are opening up for me.”

Coached by Espanyol and Deportivo La Coruna legend Walter Pandiani, Mr. Pandita has played twenty-five out of the twenty-seven games played in the Tercera division and scored six goals in the process, the highest in his team.  Being the first-choice striker in the 2019-20 season so far, he has also outscored Mathias, the brother of Paul Pogba, who is one of the most loved player of the current time.

Mr. Pandiani sees a younger version of himself in Pandita, and has stated that the pacey striker is destined for big things in the future.

In July 2019, Mr. Pandita was offered a one-month trial by Lorca FC, where he impressed Mr. Pandiani enough to secure a first-team spot. And within just two weeks of starting his senior career Mr. Pandita scored his first goal, against Deportiva Minera.

Pandita has already taken major career decisions in order to maximize his time with Pandiani. That’s not exactly a surprise though, since he considers the Uruguayan to be his mentor.

“Would an Indian footballer say no to training under Sunil Chhetri? That’s the same level that Walter has played at if not more,” said Mr. Pandita. “He is such a great human being. Especially after my previous experience, I can only say that playing under Walter I’ve learned more than any other coach.”

However, despite all of these factors, Mr. Pandita who has been making his name in Spain, has never even been invited to a national team camp or trial. That sounds particularly incongruous when you consider that players from his division are playing in the ISL.

Mr. Pandita, on his part, is convinced that he is in the right place, and that he will be ready whenever the time comes to go the national route.

“You know I’m doing this in Spain so that I can learn something others aren’t,” he said. “The money might not be as good as India, but the skill level is way higher here. Of course, it’s my dream to represent my national team; if and when it happens, I will be ready.”

As of now, India is struggling to find a replacement for Mr. Chhetri or even for Jeje Lalpekhlua, who is far from his prime.  The only options in hindsight of the selectors include an ageing Balwant Singh, an inexperience Jobby Justin, who is yet to prove himself in ISL, and Doungel, who looks like national team coach Igor Stimac’s go-to man if Mr. Chhetri is not available.

Now that Mr. Pandita might be forced to return to India due to the coronavirus pandemic, the national scouting network would have to start working overtime.