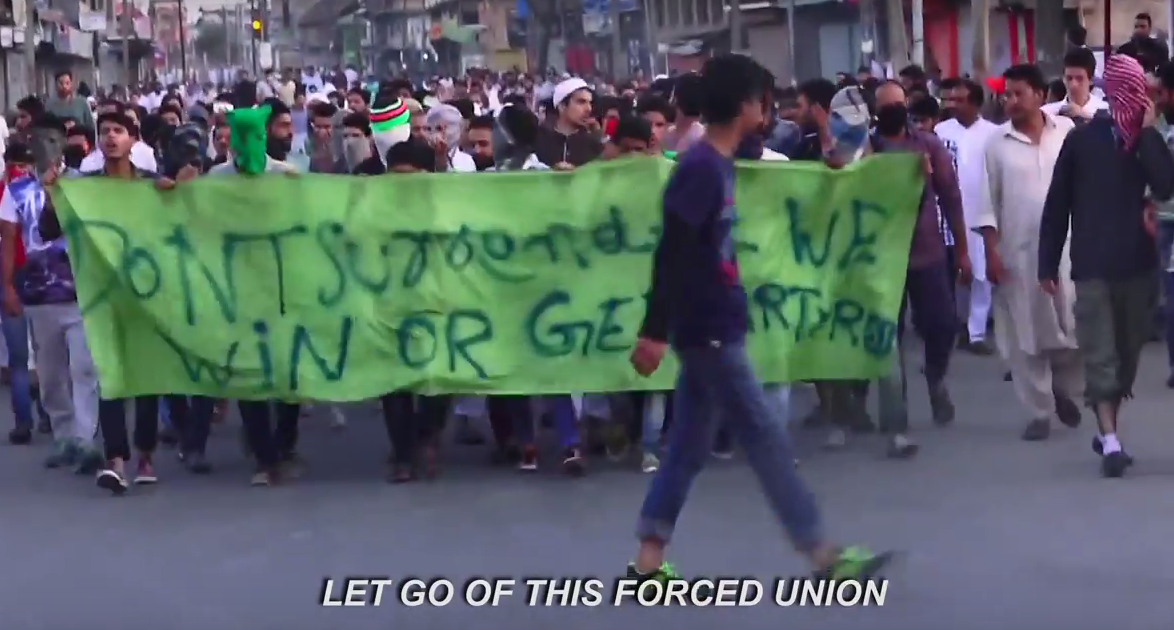 The first episode of the series produced by Video Daddy can be watched here.

“…the colour of my soul is iron-grey and sad
bats wheel about the steeple of my dreams.”

Kashmir has always been a paradisaical place. A verdant land, in the absolute lap of the Himalayas. While living in Mumbai, I was in constant touch with some of my Kashmiri friends. So it was not like I had no idea of what it was like in Kashmir. But a month and a half back, when we arrived in Srinagar with the idea of making videos about the conditions in Kashmir, nothing could have prepared us for the desolation on the streets that were once bustling and lively.

We started shooting a few days before Eid. It was a strange Kafkaesque situation: a peaceful curfew, imagine a peaceful curfew, it’s an oxymoron. People were all complaining, but other than us there was no one to talk to. Bored patriarchs would invite us to their homes and have tea with us and tell us to tell our government how bad the conditions are here. And it’s bad here: 6000 unmarked graves, 8000 enforced disappearances, 70,000 dead, 22 years of extra-judicial police actions and 2 months of relentless curb on basic freedoms.

With the rise of the right-wing in Indian politics and their gentle growls at the bickering minorities, the paranoia of this Muslim majority region has hit a new high. This paranoia has fueled counter extremist view-points. These are few and far between, but a scrap of such an incident is enough for the war mongering TV channels to fuel another kind of paranoia in the mainland, the subliminal fear of Islam.

Here is another case of a simple peace-loving people pushed to the edge, and then shoved into a spiraling fall into extremism. Further, this translates as an excuse for the dominant power to then turn the place into a war-zone, thereby cleansing any dissent and appropriating the land and its resources to their own scrupulous interests.

Arriving into this situation armed with our cameras and the fool’s courage to take the leap, we moved gingerly across the desolate curfew-ed streets of Old Town. We are yet to come across one Kashmiri who has shown an antagonism towards us. They are at their wits end and they want an end to this standoff.

The CRPF men standing most of the time in the same location continuously like home-guards are sick of squabbling with kids they have seen grow up in front of their eyes. They want an end to it. The businessmen are caught between the hartal by the Hurriyat Conference (the de facto political organization of the people) and the curfew by the army. They want an end to this situation. The daily wager, like always, is the most affected, and like always, no one even talks about these guys. Children have not gone to school for the last three months. Even they are now bored of the long vacation. Everyone wants relief from this strife.

We feel trapped between the people asking for a voice, the army asking for political will, the government asking for absolute submission and our own fretting families, who cannot understand why we would intentionally put ourselves in harms way, as per their understanding from the mainstream media’s narrative on Kashmir.

As we launch our first video today we hope that we can at least dispel some of the misconceptions that the appropriated media have so successfully managed to plant in the psyche of an average Indian. More dangerous than the 9 lac strong Indian army in Kashmir is the perception war that Indian media is waging on the people of Kashmir. We are here with the lofty ambition of tipping the scale in favour of the Kashmiri people, whose voices remain trapped, reverberating in futility in the narrow lanes of Kashmir.

But, as the conflict drags on for the ninety-fifth day today, we are also starting to feel the weariness that has permeated the soul of Kashmiris like molten iron. It is uncertain what turn the ongoing crisis might take. A political solution seems far and the Indian Government and the interests of Kashmiri people are at odds. But no matter what, it is for sure that seismic changes are lurking underneath this ongoing tense standoff.

If we leave aside the militaristic, political intimidation, there are many places worse off than Kashmir in India, in fact most of India is in a worse state than Kashmir. Kashmir is rich in many ways, its people are educated, the weather excepting the harsh winter is very suitable for habitation, there is good air and water and a rich cultural history that leaves them in good stead to deal with the onslaught of corporate enslavement. People live an easygoing laid back life.

To me, more than anything else, the lament is for the imminent rape of an innocent people. Once again a people will be forced away from their preferred way of life. The people we speak with show a resolve to hold on to their humanity, dignity and easy going spirit, but I am afraid like many other places a majority culture would usurp and appropriate another gentle way of life.

The author has worked in print and electronic documentation and journalistic coverage. He has also worked on various films like Slumdog Millionaire, Delhi Belly and Bollywood Hero. Also designed a book, Tracing Phalke written by Kamal Swaroop. Loves Kashmir and wants it to be preserved for its innocence, hopes to make a difference with this project.