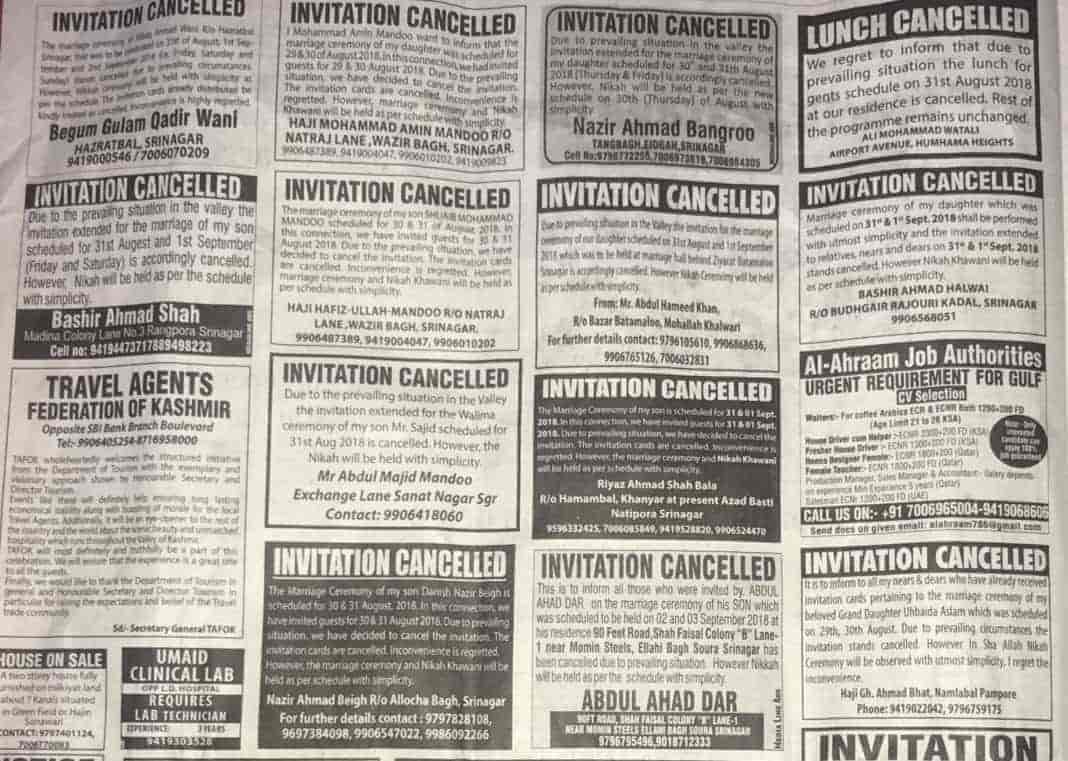 Four months ago, twenty-eight-year-old Sajid Majid got engaged to a relative’s daughter, following which the date of marriage was set to be on 30, 31 August. Majid, a resident of Sanat Nager area of Srinagar district, was happy and busy in planning the celebration of his wedding.

Until, the Supreme Court gave a new date for the hearing of Article 35A. Majid’s wedding and the SC hearing were on the same date, thus forcing the two families, like many others, to postpone the marriage.

Kashmir Valley has seen continuous protests and shutdowns over the attempts of abrogation of Article 35A, which provides special rights over land to the state subjects in Jammu and Kashmir. The Article has been challenged by a Delhi-based NGO, ‘We the Citizens’, and a few other groups arguing that it decimates against the state and non-state subjects.

“We had an arrangement of 500 people in the wedding ceremony but we canceled the dates as the hearing of Article 35A is on this day. We thought the invited guests cannot come because of the shutdown call given by JRL [Joint Resistance Leaderhip],” Abdul Majid, father of the groom, told The Kashmir Walla. The JRL had given a two-day shutdown call (30, 31 August).

Abdul Hameed Khan, 58, father of a bride, whose marriage was set to be on same dates also canceled the invitations because of the court hearing. “I don’t wish to celebrate my daughter’s wedding in a revelry manner as on this junction our state is going through a tough phase,” said Hameed.

His daughter, the bride, Nuzhat, said that like all brides, she also had a plan to enjoy her wedding with friends and relatives but things had to be changed. “I had invited all my friends and we were planning to share the happiest movements of my marriage together. But our family decided to do it now in a simple way as the present circumstances are very crucial,” she added.

Surprisingly, Many of the daily newspapers from Srinagar for the past few days have been filled with classified announcements canceling the weddings, whereas yesterday’s newspapers carried almost 70% of the add space with same notifications.

“It is to intimate all my nears and dears who have received the invitation cards pertaining to a marriage of my son slated for August 29, 30 that due to prevailing circumstances, the invitation stands canceled,” reads one of the advertisements, from a resident of Rajouri Kadal area of Srinagar.

However, they prefer to go through the Nikkah ceremony with the utmost simplicity.

Not the first time

Interestingly, the valley has witnessed similar wedding cancellations in the recent past. People in 2010 also canceled weddings as the state witnessed huge mass uprising, which was triggered by a fake encounter and then civilian killings of over 120 youth.

In 2014, when the ravaging floods hit Kashmir Valley, submerging several residential areas into water, people preferred to cancel the weddings.

In the recent past, in 2016 when again the Valley witnessed civilian uprising after the killing of popular rebel commander Burhan Muzaffar Wani of Hizbul Mujahedeen outfit, people opted to go through simple weddings. Most families fully cancelled their wedding feasts and only performed Nikkah ceremonies, as the situation in the Valley continued to be grim due to civilian killings and thousands of injured in the hospitals.

“I did my wedding in 2016 in a bizarre way,” shares Mohammad Jan, 34, a resident of Charar-I-sharief area of Budgam district. “My marriage date was fixed on 28 August 2016, but when the situation turned bad, we chose to do it in simple way. I had to go 55 kilometers away to bring the bride so we divided the distance.”

Jan and his in-laws traveled half distance at midnight to receive the bride. Perhaps, one of the many rare situations in Kashmir’s weddings at the time of charged conflict situation.