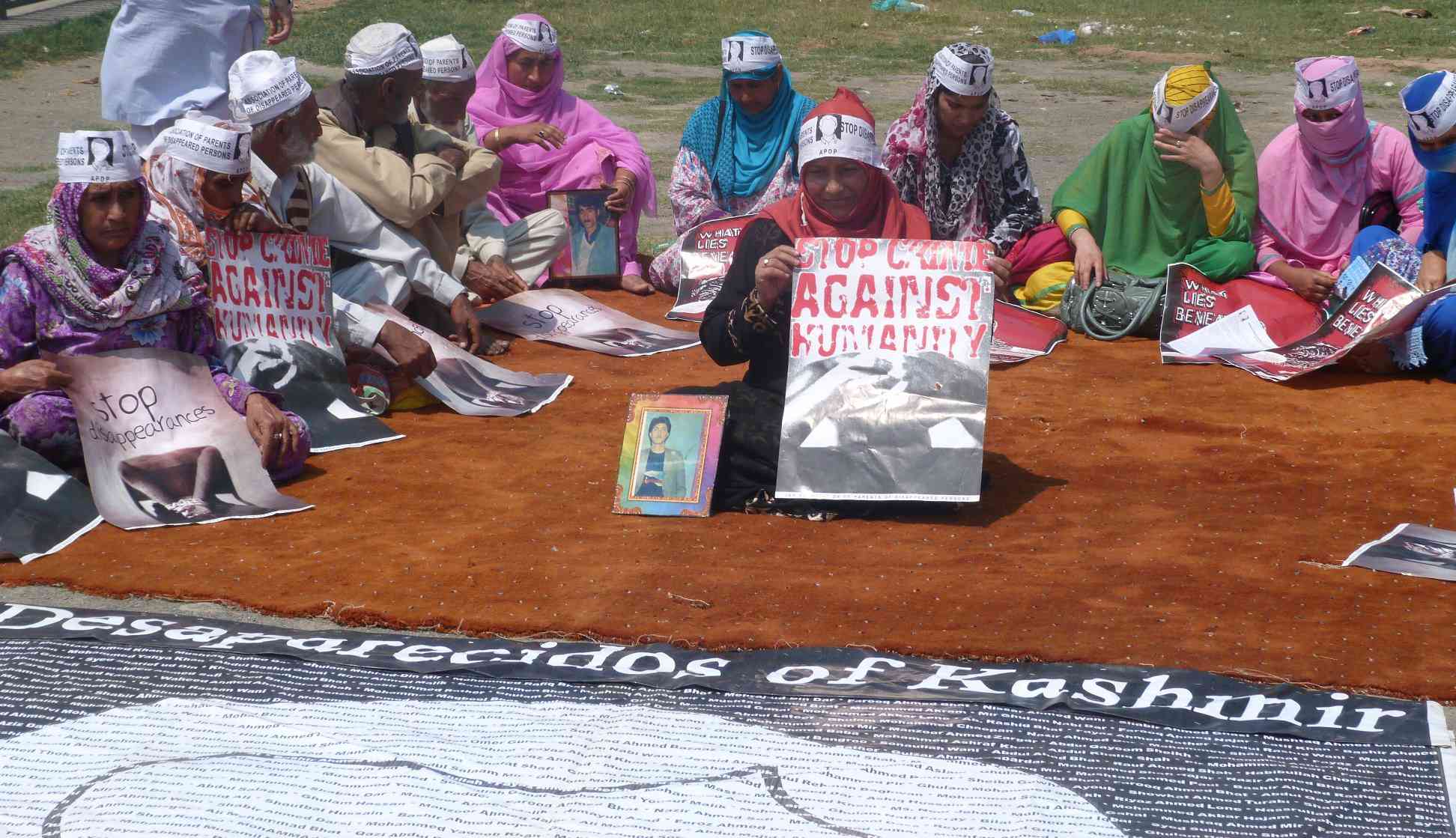 Today on the International Day of the Disappeared, several families of the enforced disappeared persons of Kashmir today observed a sit-in Srinagar. Below is the statement issued by the Association of Parents of Disappeared Persons (APDP).

Today, on 30th August 2015, The International Day of the Disappeared, Association of Parents of Disappeared Persons [APDP] assemble to commemorate the more than 8000 disappeared persons of Jammu and Kashmir who were subjected to enforced or involuntary disappearances since the outbreak of conflict in 1989.Moreover, APDP also memorializes hundreds and thousands of disappeared from Punjab (between 1984-1992), Assam, Manipur, Uttar Pradesh, Gujarat, Maharashtra and other states of India.

In Jammu and Kashmir, the government has failed to hold investigations into 8000+ cases of enforced disappearances and 7000+ unmarked and mass graves. Besides this, the survivor family members particularly half widows and half orphans have never been provided with relief or reparations with the result they continue to suffer.  The perpetrators of enforced disappearances have never been prosecuted.

The Government of India has easily got away with crimes against humanity and war crimes in the Punjab state between 1984- 1992 and now it stabs to escape the responsibility of over more than 8000 cases of disappearances in Jammu and Kashmir. In December 1996 Central Bureau of Investigation [CBI] produced an investigation report on enforced disappearances and secret cremations carried out by the security forces in Punjab before the Supreme Court of India. The investigation was based on examination of three crematoria in Amritsar which disclosed 2097 illegal cremations. Despite Supreme Court directed National Human Rights Commission to examine and determine the issue, including compensation that arises from the disclosure of flagrant violation of human rights at a mass scale. The CBI was to continue its investigation into the culpability of officials responsible, but so far none of perpetrators involved such a heinous crime has ever been prosecuted or brought to justice.

Before acclaiming Indian State and its democracy, the international community must question Indian state over its worst record of human rights violation, systematic institutional denial and continued impunity. Indian government signed the UN Convention against Disappearances in February 2007 but never ratified it. In spite of this, the government does not allow the United Nations Working Groups on Enforced or Involuntary Disappearances and on Arbitrary Detentions to visit the country. India has still not ratified the Convention against Torture, and ignored the requests by the U.N. Special Rapporteurs on torture. There is no development in relation to enact a domestic law for criminalizing enforced disappearances. Further, In Jammu and Kashmir the government of India exposed its complete indifference towards investigating more 7000 unmarked and mass graves despite the State Human Rights Commission recommended for a comprehensive forensic examination of such grave sites in Jammu and Kashmir. The Indian state has still kept all impunity laws in force for its armed forces, in all conflict areas, which results into the persistent atrocities to the innocent people.

The Indian government even after signing the Convention refuses to acknowledge the phenomenon of disappearances in Jammu and Kashmir and persists to block the International human rights groups and institutions campaigning for the prevention of enforced disappearance.

The family members of the disappeared are concerned about the growing isolation from the international community, which further compounds the problems of the relatives of the disappeared persons particularly the children who are in thousands. It is their future, which is at stake and for which the International intervention is required, as has been done in other conflict areas. The international disengagement in Kashmir on human rights issue has only helped the government of India for continuation of human rights abuses.

International community cannot escape the responsibility and must hold the Government of India accountable for human rights violations particularly enforced disappearances and complete institutional denial in Jammu and Kashmir and other parts of India.

As a part of ongoing campaigns APDP reiterates that it will always stand against India’s claim of permanent seat in the UN Security Council. The association reaffirms that it is our belief that the relatives of the disappeared who are fighting collectively against the phenomenon of disappearances are more than just survivors but warriors in the face of repression. Our struggle against impunity, for Truth and Justice and for the world without disappearances will continue vigorously until we achieve the success.