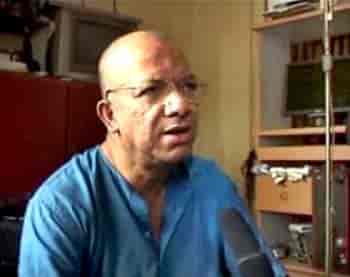 An Indian Parliamentarian and poet, Kabir Suman, opposes Zubin Mehta’s concert in the Jammu and Kashmir, scheduled on September 7. He said, in a statement, that “Kashmiris who are fighting so hard for their right to self determination, Freedom, do not need such a concert to get a notion of “peace” through music.”

Suman is a Lok Sabha member from Trinamool Congress Party, and in past too has been writing about human rights violations in Kashmir in his poetry.

“I am sceptical about the proposed Zubin Mehta concert at the Shalimar Garden, Srinagar. That’s the least I can say. A Peace Concert! Peace for whom? As the great German composer Hans Werner Henze observed in his book ‘Musik und Politik’ (Music and Politics): “Musik kann auch Knechte schaffen.” (Music can also create slaves),” Suman said.

World renown Music Conductor Mehta’s concert in Srinagar is facing opposition from several quarters of the region. Some members of the civil society, a group of journalists, columnists, academics and artists, have also organised a parallel cultural event on the same day, titled ‘Haqeet e Kashmir’ (Reality of Kashmir).

Suman also questioned could Mehta imagine himself conducting a grand orchestra in Treblinka or Dachau extermination camps during the Second World War?

He added, “As a small musician I feel ashamed that such a concert should take place at Srinagar now – with 70,000 Kashmiris dead and 10,000 Kashmiris missing and thousands of Kashmiri women raped.”

“I wonder if any music could make the politicians and the military personnel of my country change their attitude towards the Kashmiris, questioned Suman.

Suman said he, as a senior citizen of the republic of India who respects the constitution of his country and humbly serves music, joins in the protest against the proposed concert.

“Bridge of love”: Iranian, Kashmiri musicians come together for this Sufi melody

“No one can stop an artist”: Despite 2G, Kashmir comes up with online concerts

Rapper Badshah launches Mirchi 98.3 in Kashmir, raps on a shikara