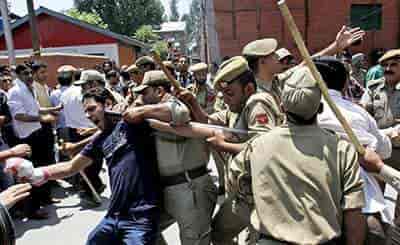 Reporters Without Borders is appalled by the violence that members of the Central Reserve Police Force (CRPF) used against two employees of the English-language daily Rising Kashmir, Mohammad Jaffar and Abdul Qayoom, in Peerbagh, in the northern state of Jammu and Kashmir, on 20 July.

RWB is also disturbed to learned that Internet and 3G mobile networks were blocked in Jammu and Kashmir on 18 July after members of the Border Security Force (BSF) shot six demonstrators during a protest against the BSF’s recent intrusion into a mosque.

“We are outraged by this police attempt to block information in Peerbagh and the violence used to achieve their goal,” Reporters Without Borders said. “We hope that the internal investigation being carried out under the command of a police superintendent quickly identifies the police officers involved in attacking journalists.”

“Given that certain local media say that BlackBerry is about to provide the Indian authorities with the ability to intercept Blackberry Messenger instant messaging, emails and attachments in real time, we urge the provincial government to explain its suspension of the Internet and 3G networks on 18 July and to put a stop to this kind of measure for good, because it isolates the region and constitutes a grave violation of the free flow of information.”

Jaffar and Qayoom were on their way to the place where their newspaper is printed in order to collect the final version of the latest edition on 20 July when they were stopped by the police, who had been deployed in large numbers. They were then beaten by both members of the police and the CRPF.

“They kicked us, abused us and threatened us with dire consequences if we came again,”Rising Kashmir quoted Qayoom and Jaffar as saying. Jaffar had to be taken to hospital for treatment to his injuries.

The vehicle used for transporting copies of not only Rising Kashmir but also Buland Kashmirand Sangarmal was later allowed to collect the newspapers following intervention by Superintendent Budgam Mohammad Arshad, who said he had begun an investigation into the incident.

The authorities routinely refuse to issue journalists with a laissez-passer when curfews are in force in the state, as many journalists who have tried to visit the region have reported.

Two days before this incident, on 16 July, Internet and 3G mobile networks were suspended throughout the Kashmir Valley after the BSF shot six civilians. The government denied ordering the suspension but local operators reported receiving verbal instructions to suspend services as a precaution.

“We received a verbal communiquÃ© to take down the GPRS and 3G services,” a representative of BSNL, the leading telephone and Internet operator, told the Kashmir Reader on condition of anonymity. “The speed of the broadband connections has also been reduced,” he added

The authorities often suspend Internet and phone services in Jammu and Kashmir in an attempt to rein in mounting protests. They did so during an uprising in the valley in 2010, when calls for protests were circulating online.

Violence against journalists has been on the increase for several weeks in India. In one of the latest recent cases, news photographer Gyandev Lokhande was attacked by members of the Congress Party in Betul, in the central state of Madhya Pradesh, while taking photos at a candidate selection meeting on 18 July.

He was taken unconscious to a local hospital. Later the same day, police arrested three people under of Section 307 of the Penal Code on suspicion of trying to murder Lokhande.

India is ranked 140th out of 179 countries in the 2013 Reporters Without Borders press freedom index.