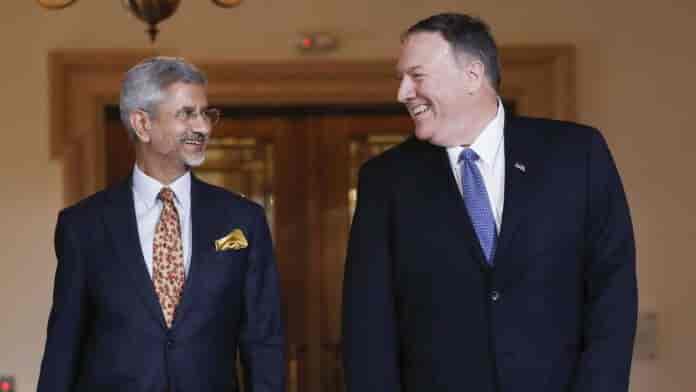 US Secretary of State Mike Pompeo on Tuesday in New Delhi said that India and the US need to jointly confront China’s threats to security in the Indian subcontinent and the Indo-Pacific, reported IANS.

Speaking at the third India-US 2+2 ministerial dialogue in New Delhi, amidst the ongoing face-off between Indian and Chinese troops along the Line of Actual Control in Ladakh, Mr. Pompeo discussed several issues from “cooperating on defeating the pandemic that originated in Wuhan, to confronting the Chinese Communist Party’s threats to security and freedom, to promoting peace and stability throughout the region”.

As per an official statement of the US government, Indian Minister of External Affairs S. Jaishankar at the meeting raised the issue of security threat India is facing from China. “In the area of defence we are challenged by reckless aggression on our northern borders,” he said at the bilateral dialogue.

The meeting assumes significance because the US secretaries of the Trump administration travelled to New Delhi amidst Coronavirus pandemic even as an intense ongoing campaigning for the Presidential elections due on November 3 was underway in the US.

“Our friendship and commitment to a free and open Indo-Pacific was clearly, clearly highly on display when we were in Tokyo this past week and a half for the Quad meeting that Minister Jaishankar and I had with our Australian and Japanese friends earlier this month,” Mr. Pompeo told his counterpart.

The US secretary of state said, “Today is real opportunity for two great democracies like ours to grow closer, as I said on my trip to India last year when I called for a new age of ambition in our relationship. I think we’ve delivered on that over this past year. There is much more work to do for sure.”

Together, India and the US are building a better future for “our people based on our shared set of values and our cultures, our defence ties, our scientific collaboration, and mutual prosperity. I thank you for your leadership to each of you to build what ought to be a defining partnership of democracies in the 21st century,” he added.

Mr. Jaishankar, at the 2+2 Dialogue said that as the global economy has taken a massive hit due to the coronavirus pandemic, the Indian government has to quickly make up for the losses as economic downturn will have both domestic and external consequences.

According to the US Department of State statement, Secretary of Defence Mark T. Esper, at the meeting with his counterpart Defence Minister Rajnath Singh pointed out that Tuesday marked the 15th anniversary of the first US-India Defence framework.

“We have strengthened our defence and security partnership considerably since then, especially over the past year, during which we advanced our regional security, military-to-military, and information-sharing cooperation. Our focus now must be on institutionalizing and regularizing our cooperation to meet the challenges of the day and uphold the principles of a free and open Indo-Pacific well into the future,” he said.

The two sides discussed key opportunities to expand their efforts on “regional security concerns” and to advance their “defence priorities”, to include increasing information sharing and mutual logistics operations between their militaries.

Mr. Jaishankar in his remarks said that at a time when it is particularly important to uphold a rules-based international order, the ability of India and the US to work closely in defence and foreign policy has a larger resonance. “Together we can make a real difference when it comes to regional and global challenges, whether it is in respecting territorial integrity, promoting maritime domain awareness, counterterrorism, or creating prosperity,” he added.