India ranks at 142 in press freedom, mainly due to Kashmir situation 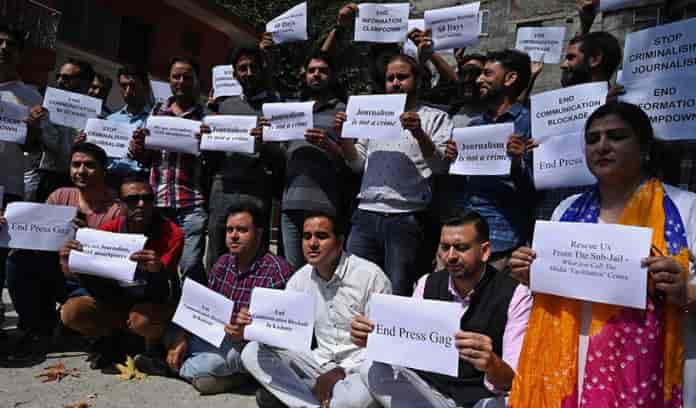 Srinagar: India has again dropped two places on Global Press Freedom Index 2020 to be ranked 142nd out of 180 in the annual analysis by Paris-based Reporters Without Borders (RSF). And this score, the RSF said, is heavily affected by the communication blackout in Kashmir last year — “making it virtually impossible for journalists to cover what was happening in what has become a vast open prison,” said the RSF.

Last year, India had dropped two points; in 2018, six journalists were killed — Shujaat Bukhari, a veteran Kashmiri journalist and editor, was among them. The RSF says that despite no murders of journalists took place in 2019, “there have been constant press freedom violations, including police violence against journalists, ambushes by political activists, and reprisals instigated by criminal groups or corrupt local officials.”

The RSF also noted that there has been pressure on “the media to toe the Hindu nationalist government’s line has increased” since Bharatiya Janata Party was re-elected in the 2019 General Election.

“Those who espouse Hindutva, the ideology that gave rise to Hindu nationalism, are trying to purge all manifestations of anti-national thought from the national debate,” stated the RSF. “The coordinated hate campaigns waged on social networks against journalists who dare to speak or write about subjects that annoy Hindutva followers are alarming and include calls for the journalists concerned to be murdered. The campaigns are particularly virulent when the targets are women.”

On 18 April, Jammu and Kashmir Cyber Police also booked a female photojournalist in Kashmir, Masrat Zahra, under the UAPA. The RSF has called for unconditional and immediate withdrawal of charges against her.