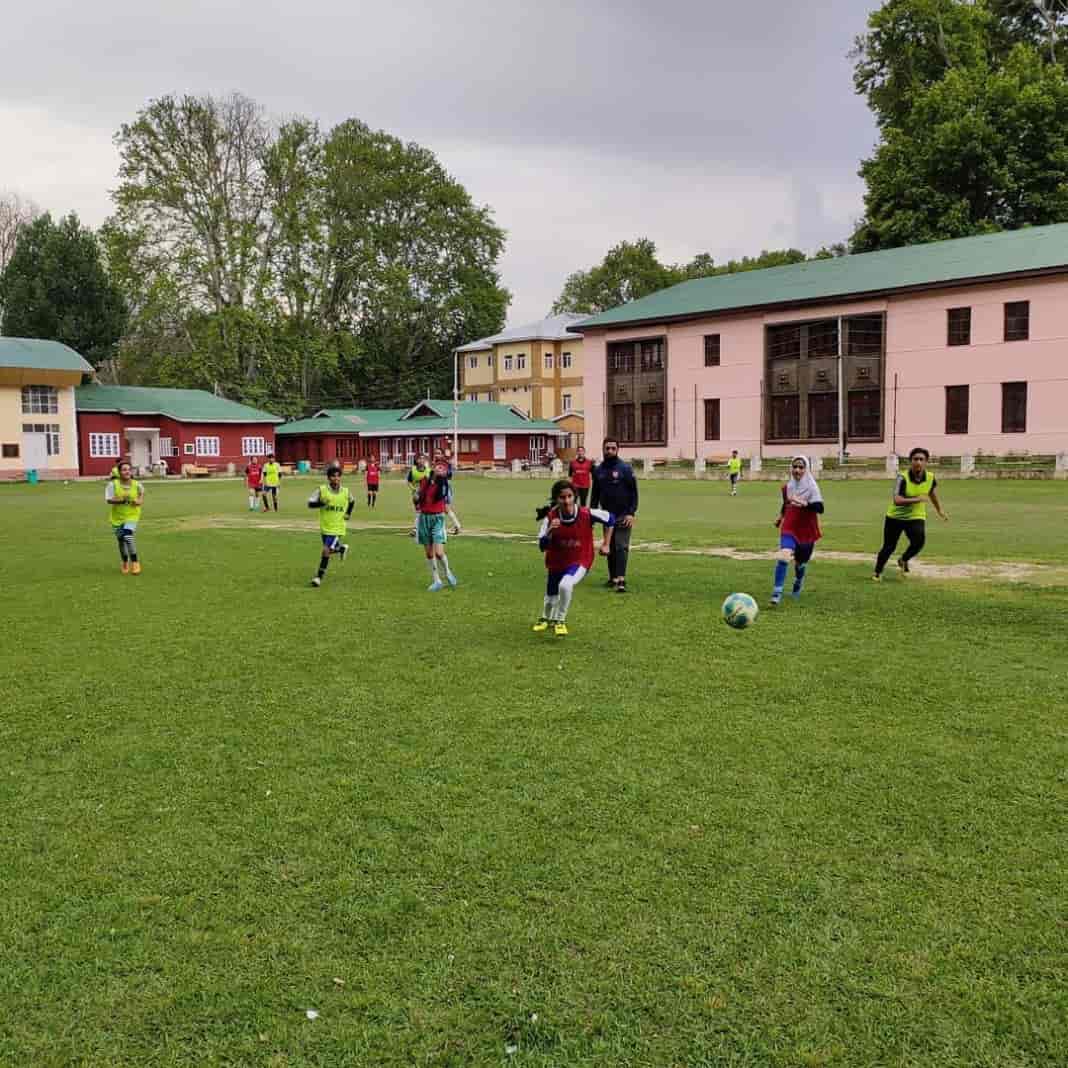 On the chilly morning of 10 January, Sana Mir, 20, clad in a black-coat, watched in awe Real Kashmir every time a player slid, dodged, or kicked in the ball in Tourist Reception Centre (TRC) Turf Ground, Srinagar. But, she is not merely among the thousands of admirers of the game.  She is a centre forward of her team at the State Football Academy (SFA), Jammu and Kashmir (J-K).

Ms. Mir was fifteen when she was introduced to football and in no time, her passion for the game crackled and was set ablaze. Arguing that fifteen is a rather late age, she looks up to a contemporary legend, Argentinian player Lionel Messi, who started professional football at the age of thirteen.

In 2014, the desire of Ms. Mir, a ninth grader at Srinagar’s Mallinson Girls School, to play football was far from quenched. Her continuous efforts resulted in the creation of an under-seventeen girls’ team, an aberration from the regular under-nineteen team.

In 2017, seeking greater exposure and opportunities academically, she moved to Delhi Public School, another popular private school in Srinagar. But, to her dismay, the scene was different and the school had no team for girls – only for boys.

“Before moving, I was hopeful [for my game] but I was not aware that they didn’t have a girls’ team,” she sighs. “It came as a shock to me.” Her resolve remained undeterred, though, and she pushed to have a team.

The school coach offered her to create one if she was able to, and continue her game. She approached willing students on her own and her effort bore fruits as a semblance of a team came up.

The team played multiple inter-school matches and took part in a football tournament organised by the government forces, Oorja. After reviewing the performance, two girls – one of whom was Ms. Mir – were selected for another round of match in Jammu.

This team lasted only as long as Ms. Mir remained in school and disbanded thereafter. A few left due to lack of passion, others due to lack of opportunities.

Ms. Mir put it squarely with respect to result-oriented regular training and practice sessions: “You study when there is an examination. When there is no examination, why would you study?” Irregular practice sessions for women is attributed to the fact that the ground gets engaged in tournaments – mostly of boys – erratic weather conditions, and political uncertainty, among others.

A combination of these factors contribute to the ailing state of women’s football in Kashmir at a level where it could decisively be a platform for garnering due recognition.

There happens to be a persistent preference for the consistent training of boys irrespective of the on-going events, with potential of hampering the routine. Despite the India-league (I-League) matches, for instance, the practice and training of the boys continue but that of the girls is prompt to go on a break.

Sajid Yousuf Dar, 45, who is currently the football coach at University of Kashmir (KU), said, “Parents must be in support of their children, especially girls, to pursue their interest in football and even consider sports as a career option.”

One of the uptown locales of Srinagar, Raj Bagh, is home to numerous girls that come from all over Kashmir to prepare for competitive entrance examinations. Amid the persistent uncertainty and political instability in Kashmir, the parents still go ahead and take the risk of sending their daughters away in hope of a brighter future.

Being a coach, Mr. Dar says with pride, “Girls show phenomenal interest in football and are so emotional about it given how seriously and responsibly they take it as a challenge.” He further asserts that “platform and opportunity hold tremendous significance and are the necessities to allow greater scope for women’s football in Kashmir.”

On his return to Kashmir after completing his tenure as a coach to India’s national senior women’s team from January 2015 to June 2017, Mr. Dar was determined to productively engage the youth in football. He firmly believes that the youth today deserve the platform and opportunities that he had had, which enabled him to realise his potential and fulfil his dream.

Mr. Dar grew up in a culture that favoured sports and wherein a sport was never a distraction from academic responsibilities. His father, Mohammad Yousuf Dar, was the first international footballer from J-K and went on to play for India in 1978. Today, at the TRC Turf ground, a stand has been after senior Dar.

Mr. Dar, together with fellow footballers of repute, Majid Yousuf and Mehrajudin Wadoo, proposed a plan “Mission 22” to the last J-K state government in 2017-18. It aimed to set up football academies across the erstwhile state, training aspirants to compete in national level professional AIFF-conducted tournaments.

Mission 22 took shape and within a year, all twenty-two districts of the erstwhile J-K had an academy for each age group – under-thirteen, under-fifteen, and under-eighteen.

A glimpse of the impact of the project is that it engaged close to fifty coaches in the first year of its inception. Mr. Dar fondly remembers the then Secretary of J-K State Sports Council (JKSSC), Waheed-ur-Rehman Parra, for extending proactive support by effectively directing funds for material and infrastructural development for sports and sponsoring training of younger coaches – Nadia Nighat being one of them.

Ms. Nighat, 23, started playing professional football in 2007. Navigating through life and approaching milestones, she played her first national match in 2010. She had intended to play further for India but the prevailing order around girls into football was hardly conducive for the realisation of such an ambition.

With a sense of responsibility and passion for doing her bit, she turned to coaching in 2014 to help bring forward other girls who wish to play.

“There are family issues. Academic education is the top most priority. Circumstances in the Valley; parents are insecure about letting their daughters out alone and independently” are a few reasons, Ms. Nighat mentions while explaining why girls are kept from coming forward into football. “Girls must be empowered with greater awareness and encouraged to be more forth coming,” she says.

Most of the girls she trains are not up to the expected standard — the teams have lost matches by up to twenty goals against the winning team. “This is to be due to the lack of adequate training imparted to the budding players,” she explains.

Other than the lack of proper infrastructural facilities and gender-discrimination, another factor adding to irregular training among individuals is menstruation. In such situation, withdrawing from arduous training is the option resorted to, but Ms. Nighat shares an alternative: “practice less, but don’t stop the practice.”

Explaining that marking presence on ground despite the affected physical efficiency is exhibiting professionalism and is an act of discipline, she added that it helps in building the stamina. It would eventually lead to a stage where menstruation will stop being a significant concern.

Juggling roles – player and a coach – she played her second national match in 2015 and third in 2018. Ms. Nighat was the head coach to another professional regional club, Lonestar, when it participated in I-League Second Division in 2015. The club was established by a Qatar-based business man. In the same year, Ms. Nighat also founded her own team – JJ-7 FC, for both boys and girls, to support the game at the grassroot level.

Before 2019, she had made fruitless endeavours approaching bodies like Real Kashmir and J-K Bank to initiate for a women’s team. Following her persistent initiatives, Lonestar club approached Ms. Nighat to collaborate and form a women’s team under the club.

Its first match was due on 6 August 2019 against a Bandipora girls’ team in a regional tournament. A day prior to that, the central government scrapped the region’s decades-old constitutional special status – which gave Kashmiris’ exclusive rights over government services and land acquisition – under Article 370 and Article 35-A of the constitution. The authorities snapped all lines of communication and imposed strict restrictions across the erstwhile state.

In the slew of all that followed the 5 August decision, one thing got lost: the very first Lonestar women’s match; there has been no talk about this match since. Ms. Nighat remains blank at this development.

Coach Mr. Dar agrees that Kashmir needs to cultivate a professional attitude towards the game and that the girls must be allowed to come forward and play. “Sports don’t discriminate,” he said. “Then why should we?”

Ms. Nighat puts it across clearly that there needs to be a greater vision for women football. She was elated to learn that one of her students had earned the title of “Man of the Match”, for her remarkable performance in a game. She chose to overlook the gender insensitivity of the accolade and was happy for her student’s admired performance.

Her devotion to her game far exceeds the desire she once harboured to play the game at bigger platforms. Today, being a coach, she finds fulfilment in seeing other girls play. Her motivation remains that “girls must not be kept from playing football.”

With fewer occasions to perform professionally, diminished scope of competition, and compounded with the withdrawal of institutional support, the journey of wanting to play football for Kashmiri girls is collectively dotted with stepping stones and stumbling blocks.

On any other day, when Ms. Nighat is trying to nourish young talent in the game, Ms. Mir, keeps herself physically fit and trains with SFA and prepares for the day an opportunity will come knocking.

The story appeared in our 20-26 January print edition.