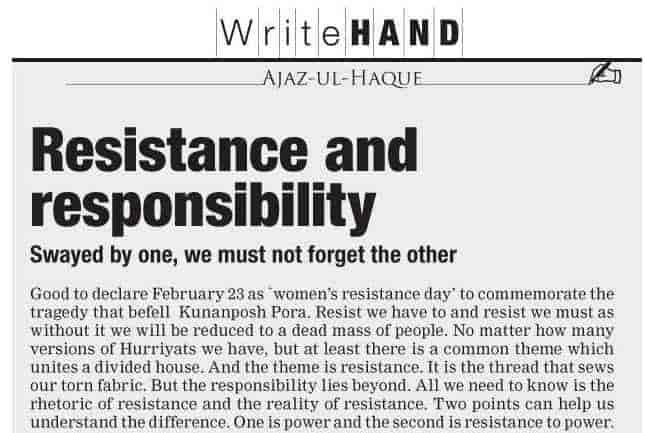 One can never look into someone’s mind to find out what’s going on in there. When we write it is that something that comes out through words. There is this commonly used word “power,” that I find in several writings. What is power? Well, I haven’t reached to any conclusion to figure out. It is a process of understanding its meaning – though dictionary definitions are available in abundance. I often read how this word finds a place, comfortably, in arguments revolving around socio-political issues.

Last Sunday, I found the same word being used in a newspaper column. I don’t question the knowledge of the columnists but it makes a reader disinterested when there is no detailed explanation of such concepts. I came across an op-ed column (Resistance and responsibility), in Greater Kashmir newspaper, by veteran columnist Ajaz Ul Haque. He writes smartly. No doubt. I read his column every Sunday. It was, indeed, a thought-provoking piece, in Kashmir dispute’s context, but I found it strange to address issue of “power” so weakly. Mr. Haque writes, “Resist we have to and resist we must as without it we will be reduced to a dead mass of people.”

In the first paragraph, he establishes that the people of Kashmir have no option other than resistance. And further ahead, he supports his argument, “No matter how many versions of Hurriyats [Pro-freedom groups] we have, but at least there is a common theme which unites a divided house. And the theme is resistance.” He calls it “the thread that sews our torn fabric.” The thread – he doesn’t use ‘a thread.’  So, it is the only thread that is binding people together. Till this sentence I understood that resistance is the only binding force.

In his following sentences he doesn’t mention what is that “power” or “resistance to power.” He mentions “rhetoric of resistance” that is also vague and not clarified. Are these two concepts so weakly theorized or detailed that we have to speak hypothetically to explain. And then “we know power corrupts.” I don’t think everyone knows it; at least not the common people for whom newspapers, I guess, are printed. I think quoting Lord Acton for his actual phrase can change the whole debate. Acton had said: “Power tends to corrupt, and absolute power corrupts absolutely.”

So, here we are talking about the power of the oppressor – the one who is inflicting violence – or in opposite way the one who has the power is subjecting people to violence. So if the oppressing structure has the “absolute power” it is corrupt absolutely. His argument of “before we resist any kind of oppression” is falling apart here. When the power is corrupt society can’t stop resisting. As he also writes, “that makes resistance the only possible option.” Now we can discuss if that resistance is against one power structure or several but he has included four forms of oppression above. I agree with the point that the resistance is responsibility but I disagree the phrase “the success of resistance lies in survival.” The “resistance” is a process. It is not quantitative. If he is talking about survival here then as one can see it has been surviving for decades now.

Also, the reader is not told how is power corrupt in Kashmir or will be so in future. When I read another sentence, “The debate is not moral, but rational.” I was happy that now I will find something rational – a debate based on rational arguments. But I was disappointed, as I read, “Let’s not forget in that melon and knife story, it’s always the poor melon that bleeds no matter which falls on which.”

In the concluding lines he contradicts his starting points himself by writing, “Before we resist any kind of oppression –  political, military, cultural, or moral – let’s not become helpless melons.” So before resistance, as he writes, against any oppression we don’t have to become vulnerable to violence of any kind (as I could get from the melon story). I find it awkward to start such a major debate above and then compare it with the melon story. Still, even if we use that as a metaphor to the situation but the oppression in itself is an outcome of power. If power exists in the society, a structure of power that enforces its power upon the citizens, and to maintain the hegemony of that power the powerful has to use oppression. Violence is an element of that oppression. In order to put it simply, can one stop resisting and figure out if he/she is subjected to violence. I would like to ask, isn’t resistance itself the opposition of that violence – the violence that comes from oppression?

Mr. Haque, I highly respect your work and views, and I expected the debate to be more detailed and rational. But I am disappointed to find generalizations and assumptions without any factual or theoretical support. I think by ending the debate that “power corrupts” is an injustice to the debate itself. We can move beyond, and say there is power, so there will be resistance of every kind. Also, I don’t get it how you frame this: “the suicide bombers of a self-destroying ideology.” Now you’re introducing ideology here – so was that power mentioned above of ideology. This piece, if analyzed between the lines, is hinting towards surrender, not the resistance. You begin with commenting on declaring February 23 as women’s resistance day and then conclude “we strike or we are being struck at, both ways we fall.” Are you saying declaring women’s resistance day is “we strike” and “we fall”?

I’m sure there was not much space to put everything in the column but it would be much appreciated if you explain further. I think you are raising a major debate but within the certain boundaries. I, and perhaps more readers, would be glad to read your detailed analysis. Looking forward to your response, if you think this issue is worth debating.