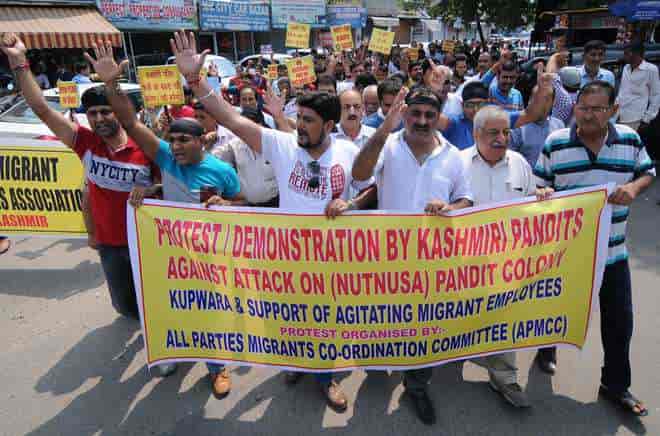 On Saturday, the non-migrant Kashmiri Pandits on Saturday issued a “last communication” to the Centre and threatened to sit on “fast-unto-death”, reported The Tribune after the community “had enough” of “false assurances” and now they were even being denied an audience by the government.

A KP leader Sanjay Tickoo announced in a Facebook post: “Time has come for me, as president of the Kashmiri Pandit Sangarash Samiti, the representatives of the non-migrant Kashmiri pandits, Kashmiri Hindus living in Kashmir, to go on fast-unto-death to fulfil the dreams of my young community members living in Kashmir Valley….sending last communication to the Government of India and the government of the Union Territory of Jammu and Kashmir.”

Talking to the newspaper, Mr. Tickoo said that the community has “had enough” of “false assurances” and now they were even being denied an audience by the government. “There is a limit to lip-service and false assurances. Now, for the past three months, they are not even responding to our pleas. After my Facebook post, I am getting lots of calls, especially from the youth of our community who want to join the fast-unto-death,” he said. “We will wait for a week before starting the fast as we have sent a final communication to New Delhi.”

He said their demands were: “Jobs for 600 unemployed educated youths, which are already recommended by the Ministry of Home Affairs, Government of India, from time to time, and directions issued by the High Court in multiple petitions filed by us. Monthly cash relief for 808 families living in Kashmir Valley and preservation, restoration and renovation of all temples, ‘asthapans’, holy springs and cremation grounds in Kashmir as already clearly directed by the High Court passed in the petitions filed by Kashmiri Pandit Sangarash Samiti in a representative capacity.”

In the recent past too, other Kashmiri Pandit bodies, namely the Reconciliation, Return and Rehabilitation of Migrants and Hindu Welfare Society, have expressed displeasure and flayed the Centre for using the community only for vote-bank politics.