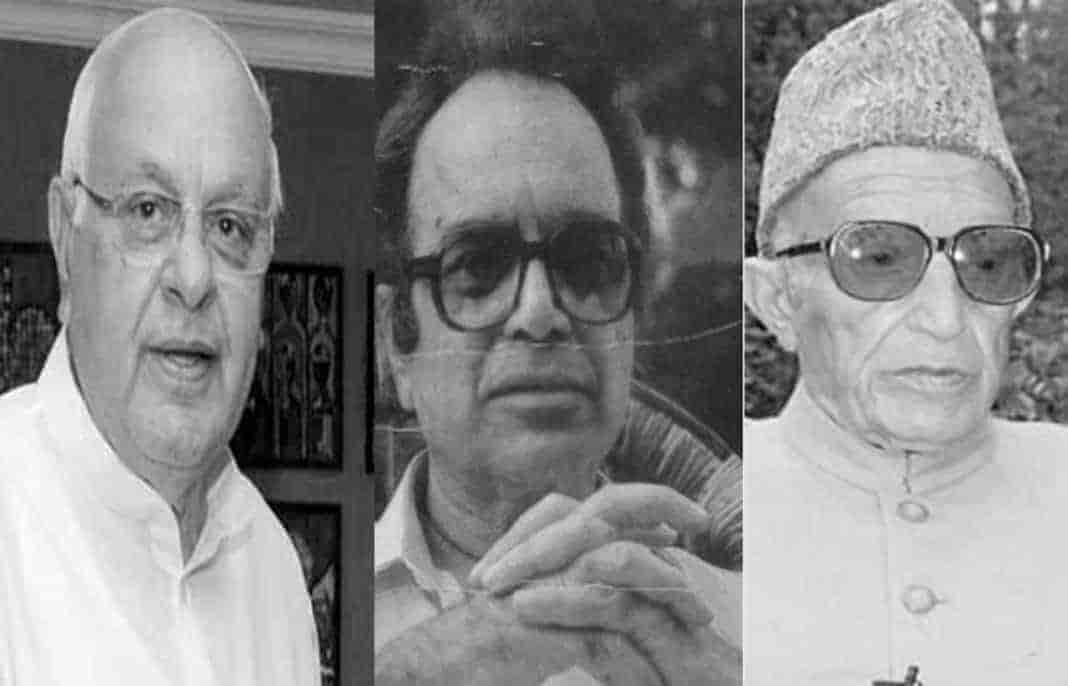 In 1984, Farooq Abdullah (left) of National Conference (NC) was dismissed by the then Governor of Jammu and Kashmir, Jagmohan (center), and Abdullah’s brother-in-law Ghulam Mohammad Shah (left) was elected as chief minister with rebel NC MLAs and Congress support.

If you are a politician, civilian or a rebel from Kashmir, the above quote explains it all. What Kashmir is into today, politically and psychologically, is its relationship with history. In the mainstream politics, New Delhi has shown how little they respect the regional political parties – like People’s Democratic Party (PDP) or National Conference (NC), both of whom have been faces of New Delhi to Kashmiris. It is all proven. The street word is out there vehemently being played, over and over again, on social media and news channels.

For long, perhaps always, what Kashmiris have been saying, is now out there being said by same politicians who defended the opposite. New Delhi never trusted anyone in Kashmir, not even their own limbs. How can one justify elections now? Even in the recent Urban Local Body elections people didn’t even know the candidates. Or even the elected representatives at all. Does the process of elections even have legitimacy? It doesn’t seem so, as it was always argued by scores.

Whether it was the rigged 1987 elections or yesterday  when Governor dissolved the assembly after receiving the claim to form the government by the three major political parties. So is it the BJP vs. The Rest? No, it is not. It has always been New Delhi versus Kashmir, whether you are into the mainstream or in their opposition, there is no other way.

Since 1947, history is the witness. In July 1984, similarly, Farooq Abdullah was dismissed by the then Governor Jagmohan. “I am satisfied that you have lost the confidence of the majority of the MLA’s in the Legislative Assembly,” read the letter by Jagmohan to Abdullah. “I, therefore, regret to inform you that I have dismissed you from the chief ministership of the state and dissolved the council of ministers headed by you.”

Back then it was Congress doing it to Abdullah. Today it is the BJP doing similar to the PDP, including NC and Congress too. If it was an estranged brother-in-law of Abdullah, Ghulam Muhammad Shah, who formed a government with 12 NC MLAs, supported by 26 Congress members, and became the chief minister.

ALSO READ: In Jammu and Kashmir, a day of fax machine and memes

In 2018, you could see similar algorithm, emerging altogether. But was Shah guilty in 1984, or is someone else wrong today? It is all water from the same spring, where power decides your affiliations and ideologies. Within minutes, day, weeks, or months, you will see new parties emerging and new coalitions forming all for the sake of power, and political relevance too.

So the terms like “terror-friendly parties,” “acting at the behest of Pakistan,” “murder of democracy,” or “pernicious’ mindset” are all terms that change owners or characters with political seasons of the state. With time new terms will emerge, vocabulary will change, love and hate will change, with single aim: power.

In 1984, when Abdullah was dismissed, P.L. Handoo, a former law minister in his cabinet, told India Today that “the Congress party committed a similar fraud on Kashmir in 1953, but they paid a heavy price for it and ultimately brought Sheikh Saheb back to the valley to keep the state under control.”

That is the bottom-line of the political developments in the state today. You may see alliances breaking or emerging, accusations and criticism, but eventually, once again a new coalition and homely government will be formed. In politics, especially in Jammu and Kashmir, it is never this party versus another, but more like who does New Delhi see good to be in power.

It is exactly what Zinn says, and here politicians should take a lesson, “If you don’t know history it is as if you were born yesterday.” But are Kashmiris born yesterday? I don’t think so.