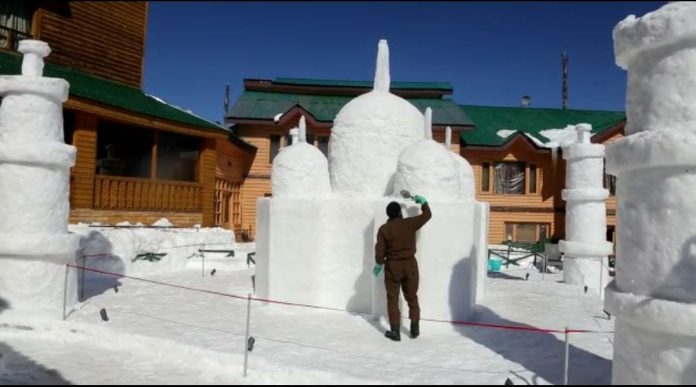 Gulmarg: A Taj Mahal like structure has been made at snow heaven Gulmarg in north Kashmir’s Baramulla district within 17 days by local construction workers.

The structure has become a major attraction for tourists, who had earlier seen Igloo and snow bikes at the picturesque tourist resort.

Taj Mahal was built in Agra by a Mughal emperor in memory of his favourite wife, globally known for its masterpiece in world heritage.

Gulmarg remains snow-capped during the winter season and is a heaven for winter game lovers especially for skiers, snow bikers, sledgers, and other outdoor games.

The place has hosted events like national-level sports events including Khelo India besides other training camps.

In the previous two consecutive years, Gulmarg earned a name for Igloo and Snow bike since both were introduced for the first time which attracted tourists from across the globe.

In the ensuing year, apart from World’s biggest Igloo, Gulmarg has drawn attention for the construction of a Taj Mahal like structure which is made of snow by local construction workers.

Muhammad Yusuf Baba, one of the senior construction workers, told KNO that it was challenging task to complete the work in 17 days since the temperature was harsh going below sub-zero on almost every day.

“Such attempts will definitely bring more tourists to Gulmarg. Every facility is available here,” he said.

Arun Sharma, one of the excited tourists from the Himachal Pradesh, said that snow adds more to the beauty of Kashmir and it’s his second visit to Kashmir.

“We are enjoying ourselves in the snow with friends.  There is no hesitancy in visiting Kashmir valley since there are rumor-mongering about safety in Kashmir.  Everything is good and no one should skip even a chance to visit a place like Gulmarg,” Sharma said.

He also said that it’s for the first time they have seen the snow-made Taj Mahal which is fascinating and attractive.

Satyajit Gopal general manager of the local hotel said that the Snow made Taj Mahal concept is aimed to give this beautiful place something that people remember for the times to come.

“It has already started to become the center of attention for tourists and locals. They like to take pictures and spend quality time here,” Gopal said—(KNO)