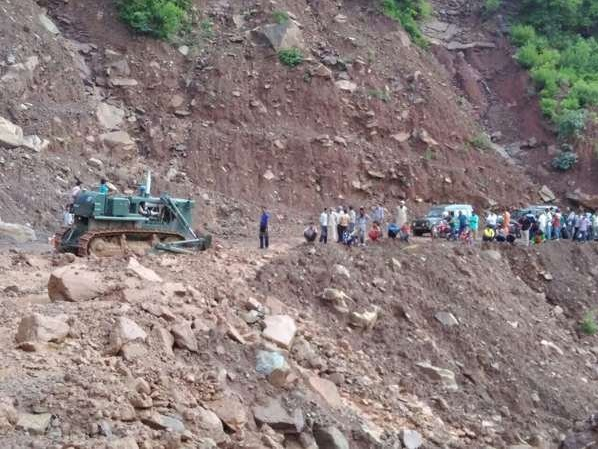 There has been a significant rise in the water level of Vaishaw-Nallah after interminable rains in south Kashmir’s Kulgam district on Friday, resulted in washing away of several diversions constructed after 2014 flood.

Earlier in 2014, waters of Vaishaw-Nallah, originating from Kousarnag in Aharbal triggered the 2014 flood in Kashmir. According to the reports, following the heavy rain since last night, a plentiful water of the nallah washed away many diversions in Kulgam district. These diversions were constructed after washing away of many bridges in 2014 flood.

Following the continuous rain forecast, Amarnath yatra was also halted from both Baltal and Nunwan base camps due to bad weather on Friday.

“The yatra has been suspended as of now and no pilgrims are allowed to move towards cave shrine in view of the rainfall and slippery road conditions along Baltal-cave shrine track,” an official at Baltal base camp said.

He said no pilgrim was allowed to move from either side to the cave on Friday as a precautionary measure. He also added that a footbridge got washed away at Brari Marg due to the incessant and heavy rains since yesterday evening. The yatra was suspended on Thursday morning also due to bad weather. However, it resumed later in the afternoon with the improvement in the weather.

The continuous rainfall in the valley resulted in the blocked of Srinagar-Jammu highway due to landslides in Ramban district.

According to an official, huge boulders came rolling down from a hilltop on the highway blocking the movement of vehicles on the Jammu-Srinagar highway, the major route that connects the valley to Jammu region.

Taking to Twitter, IGP of Jammu and Kashmir Traffic Police said that Sonamarg-Leh road and Moghul road have also been closed.

Following steps have been taken considering the safety of the travelers in mind, the official added. “Men and machinery have been pressed into service to restore the movement of traffic on the highway,” he said.

According to the reports, hundreds of public and private vehicles, trucks, are stranded at different places on the highway.