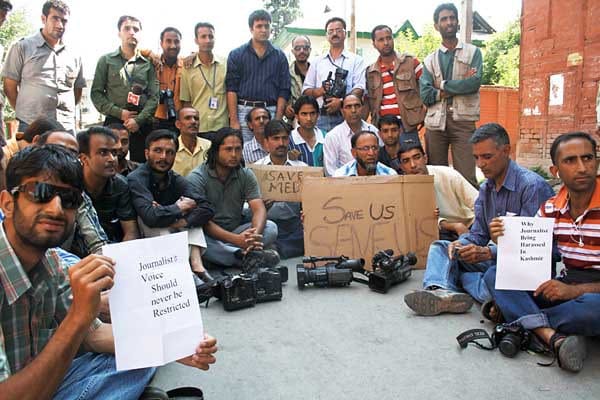 Indian Journalists’ Union (IJU) today condemned the beatings that two news photographers received from local police and members of the Central Reserve Police Force (CRPF) while covering clashes between police and demonstrators on 19 August in the Nowhatta, old town district of Srinagar, the capital of the northern state of Jammu and Kashmir. IJU in its statement urged Government of India to order an immediate halt to this outright persecution of journalists.

The statement issued here, under signed by NEC Member, IJU, Geetartha Pathak came after, Showkat Shafi, a freelance photojournalist employed by Al-Jazeera who helped produce an Al-Jazeera special report available online, “Kashmir: the forgotten Conflict”, was beaten by police officers and taken to the Nowhatta police station. Narciso Contreras, a Mexican photographer who works for the California-based Zuma Press agency, was also arrested and beaten by police officers.

A group of young people gathered outside the historic Jamia Masjid mosque in Nowhatta after Friday prayers on 19 August in response to a call for a Martyrs Day march by Syed Ali Shah Geelani, the chairman of one of two factions of the Hurriyat Conference, a political alliance formed in the 1990s that wants self-determination for Kashmir. Police and CRPF units intervened quickly, using batons and slingshots to disperse them.

The two photographers were hospitalized after being released that evening. A Nowhatta police spokesman disputed these accounts, insisting that no one was injured during the incidents.