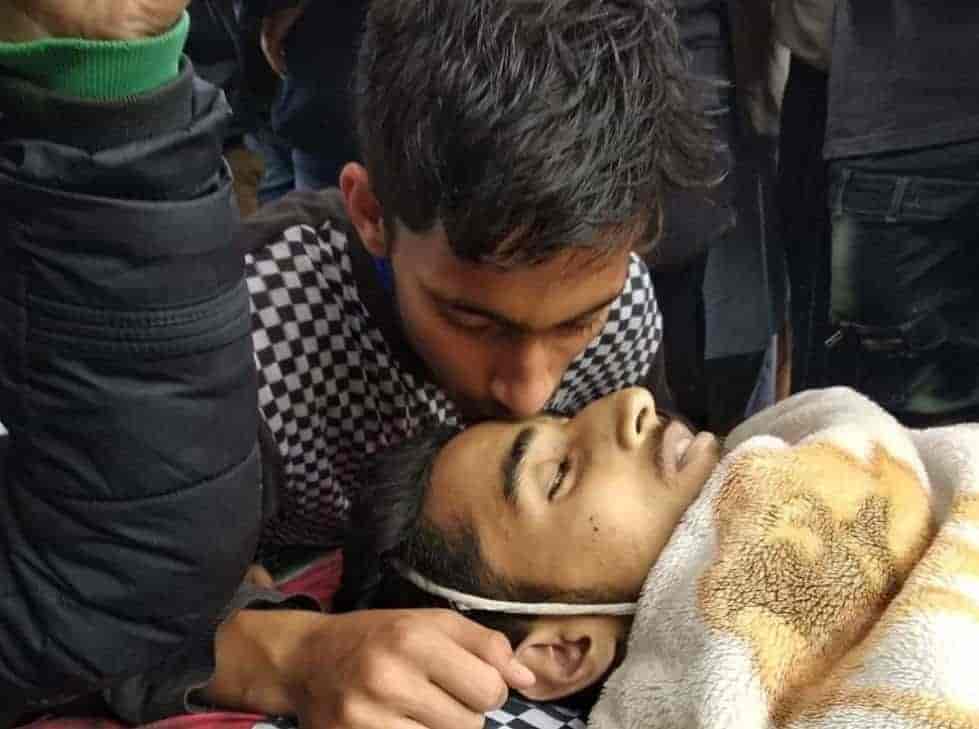 A few hours earlier, he had told his mother that he was going to offer Friday prayers and return to join her for lunch. His mother bid him goodbye and waited for his return. While his father, a doctor, was on duty at the hospital emergency services.

He never returned home to join his mother but after a few hours was lying on a bed in the hospital emergency ward, in front of a doctor – his father.

On a rainy morning of 29 June 2018, the sixteen-year-old boy Faizan Ahmad Poswal, a student of class 10, woke up a little late than his daily schedule. He didn’t go to school but spent his morning at home in Pulwama town of South Kashmir. At noon, he left for Friday prayers, assuring his mother of returning for lunch.

While he was offering the prayers in the neighborhood mosque, a few kilometers away the government forces had launched Cordon and Search Operation in Thammuna village of Pulwama district. As the news of the cordon spread across the town, people started marching towards the site to help the trapped militants escape. Announcements were made on the mosque loudspeakers, asking people to march towards the site. Scores of civilians followed the announcement, so did Faizan.

Father looking for his son

At the Pulwama District Hospital’s emergency ward, Dr. Abdul Gani Poswal, Faizan’s father, immediately dialed his son on hearing about the gunfight and the following clashes. But the phone only continued ringing; no one answered.

At the gunfight site, dozens of civilians were injured in the clashes, who were taken to different hospitals, including the Pulwama District Hospital.

Around 4 pm, Dr. Poswal left to see if his son was home – the hospital quarters, where he has been living with his wife and three sons – Usman, Rehaan, and Faizan. On reaching home and not finding his son, he received a call from the hospital about a patient trying to survive a bullet injury.

Dr. Poswal rushed back to the hospital to continue his duty.

Along with many injured who were brought to the Pulwama District hospital, a teenager with three bullet wounds was also brought. All of them were injured during clashes near the encounter site.

“As I entered into the hospital. I found all my colleagues standing around a bed. They looked at me with gloomy expressions. As I reached close to the bed, I saw a bloodsoaked body. He was my son, Faizan, cold and dead with semi-open eyes,” said Dr. Poswal, his father, sitting in the makeshift tent installed for mourners visiting the family.

He froze in trauma- confused.

“I couldn’t understand what was happening,” said Dr. Poswal. “I had seen him at morning but now he was dead in front me.”

Dr. Poswal added that once he saw his son’s body, he felt the world was set on fire. “My son was very attached to me and his separation has marked a deep wound in my heart.”

As the father was standing with his son’s body, by then the crowd in the hospital and outside had swelled.

Mother’s wait for her son ended with a phone call

On 29 April 2002, Faizan was born in the same hospital where he was brought dead.

When the word of Faizan’s death spread across Pulwama town and its adjacent villages, more people rushed to the hospital. Once Faizan’s body was taken outside the hospital, on shoulders, the gathering broke into wails and raised anti-India and pro-freedom slogans, while offering first funeral prayers.

At home, his mother, Shaheena, who was waiting for him over lunch, received a call on her phone, only to hear cries. It was her husband, telling her about the death of their son. She couldn’t believe it and fell unconscious.

“We had met as usual in the street on a Thursday evening and had bantered around till night. Next day at around 5 pm, I heard from another friend that Faizan was shot dead by the forces near the gunfight site,” said Ajmal Rafi, his friend.

Faizan would tell his friend Rafi that they are under “brutal occupation facing atrocities of the oppressor.”

“One day I will make them answerable for it,” he would tell Rafi.

“My brother was very religious and would tell me that I have to fight for Kashmir’s cause,” said his brother, Usman Ahmad, a class 12 student. “He was never involved in any criminal case in the police records, till now, but on this day he had told one of his friends that he will not let the Indian army kill the freedom fighters.”

A boy with love for Urdu literature and Kashmir’s resistance

Faizan loved Urdu literature as much as he loved Kashmir’s resistance movement. His maternal uncle, Dr. Altaf Naqshbandi, who was like his father, is an Urdu professor at the Central University of Kashmir.

“I have rarely seen such children in my life,” said Dr. Naqshbandi. “He was very small in age but very wise and had a strong ideology. He was in love with Urdu literature and would often discuss social and religious matters with me.”

If the government forces have to shoot at stone throwers and protestors, said Dr. Poswal, they can warn them by shooting below knees. “But they are directly targeting teenagers, only to kill them.”

One of Faizan’s cousins, Adnan Naqshbandi, an advocate, raised a few questions that many families in Kashmir have today. He wants to know who killed his younger brother Faizan. “What led him to the encounter site? Why they can’t file a charge sheet against the culprits? Why don’t we have basic fundamental rights here? Why has the government of India not come forward with a policy that can save thousands of Faizan’s?” asked Adnan, amid sobs and anger.