I have no hesitation to say that BJP and RSS killed my workers: Shameema Firdous 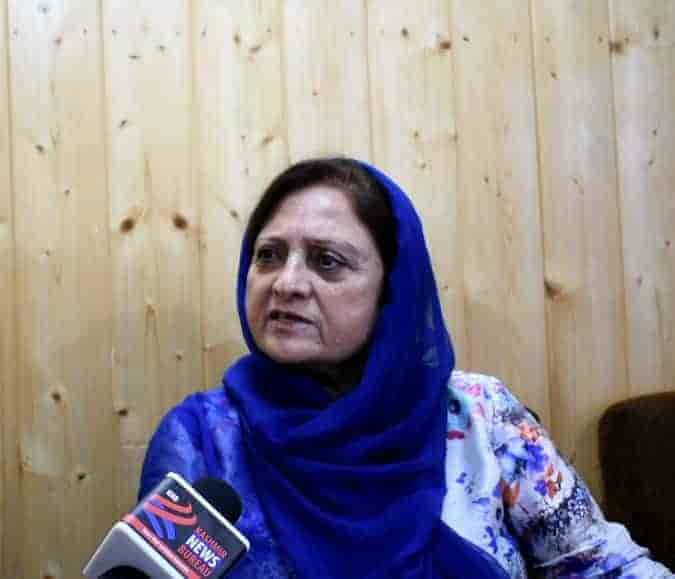 Senior National Conference (NC) leader and MLA from Habba Kadal constituency Shameema Firdous on Friday alleged hand of Bharatiya Janta Party (BJP) and RSS in the killing of two of her party workers.

“I have no hesitation to say that BJP and RSS killed my workers. I have no doubt about it,” a fiery Shameema said in the presser.

Shameema said that the assassination of her workers was a well planned conspiracy to discourage people and National Conference from participating in the assembly elections.

Hitting out at Governor Satya Pal Malik and police for making false claims of security arrangements, Shameema said that the gunmen came to the locality twice to shoot her party cadres.

“Where was the police? Where were security checkpoints created? What happened to the assurances of Governor of free, fair and secure polls?

“No militant outfit has claimed responsibility for these killings. Government and the Governor are equally responsible for the killing of my workers,” Shemeema said.

“My workers have always helped poor and needy. They would go to the homes of people to enquire about their well being,” Shameema said before breaking into tears.

Shameema said that BJP was going all out to ensure victory in the municipal and local body polls which her party has boycotted over the issue of Article-35A.

“We had no connection with election process but BJP had. A BJP leader admitted that his party has fielded candidates as independents. They are doing everything to win these polls,” she said.

“BJP leaders divided Kashmiri pandits, brought postal ballots to Kashmir. Congress too is in the fray. There is much more in the killing of my workers than meets the eye,” she said.

The senior NC leader asked Governor to order a probe and ensure that the killers of her two innocent workers are unmasked.

On Friday, unidentified gunmen shot at three NC workers in Habba Kadal locality of the city setting alarm bells ringing in the security establishment. Two of the NC workers identified as Mushtaq Ahmad Wani, Nazir Ahmad died in the attack while Shakeel Ahmad Zangoo was critically injured. ( With inputs from GNS)