“I am unable to bear the torture by cops”: Muslim family in AP dies by suicide 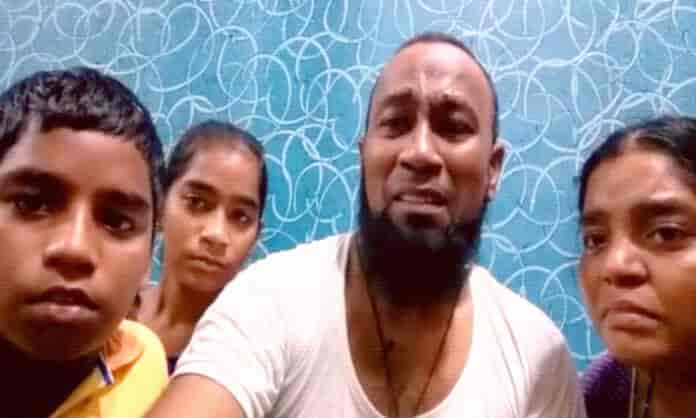 A Muslim family of four in Nandyal town of Andhra Pradesh who died by suicide has alleged that two police officers forced them to take the step.

The two cops, Circle Inspector, Somasekhara Reddy, and Head Constable Gangadhar are arrested on charges of abetment of suicide, The Logical Indian reported.

In his last video that he recorded, Sheikh Abdul Salam along with his wife Noorjehan (38), their daughter Salma (14) and son Dadhi Khalandar (10) declared that he had nothing to do with the two crimes he has been accused of by the police officers and that he is unable to bear their torture any further. The family has no one to help and are therefore taking this step, reported The News Minute.

“I didn’t do anything wrong. I have nothing to do with the theft that happened in the auto, or in the shop. I am unable to bear the torture. We have no one to help us. That’s why I hope at least my death will bring peace of mind,” Mr. Salam as quoted by the News Minute.

His wife was a teacher at a private school, their daughter was a Class 10th student, and her brother was in Class 4. Their bodies were recovered by the Government Railway Police (GRP) of Kurnool district. Mr. Salam was accused of theft at a jewellery shop he worked earlier.

The owner of the store suspected Mr. Salam of having stolen the gold, he was sent to jail. After he was released on bail, he started driving a rented auto. However, he was continuously tortured by the shop owner and the police, the relatives told the media. Every time he used to go for routine formalities at the police states, the officers would hurl abuses at him.

He was arrested again after a passenger complained of his missing bag. The police alleged that the person had travelled in Mr. Salam’s auto and accused him of stealing. The two policemen harassed Salam for over seven months.

An inquiry has been initiated in the case, and Chief Minister YS Jagan Mohan Reddy, and two IPS officers, IGP Sankha Brata Bagchi and senior IPS officer Arif Hafeez have been appointed to conduct further investigation into the matter. The two policemen are booked under Sections 323 (Voluntarily causing hurt), 324 (Voluntarily causing hurt by dangerous weapons or means) and 306 (Abetment of suicide) of the Indian Penal Code. Tweeting the video, opposition leader, Chandrababu Naidu said that Salam and his family were an example that showed how Muslims were being harassed and framed in cases.