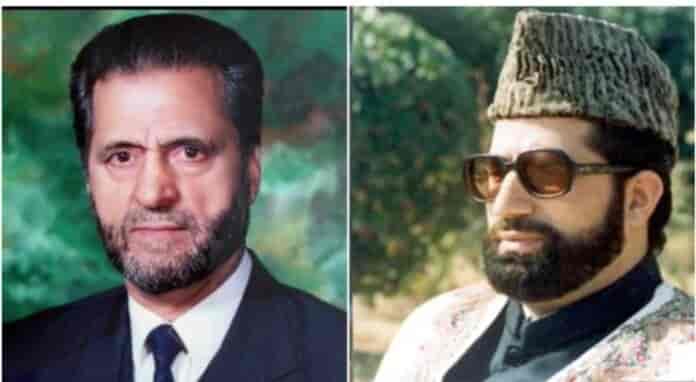 In a statement, Hurrriyat said, “On the thirty first Martydom anniversary of Shaheed e Millat Mirwaiz Molvi Mohammed Farooq and the nineteenth Martydom anniversary of Shaheed e Hurriyat Khawaja Abdul Ghani lone ,APHC pays glorious tributes to these distinguished sons of the soil, who lost their lives standing steadfast to their ideals and vision for the people of J-K.”

Hurriyat also paid glowing tributes to the ‘martyrs of Hawal, brutally killed by forces while carrying the body of Shaheed Mirwaiz.’

APHC said that Mirwaiz, being the the scion of Mirwaiz family was an acclaimed Islamic preacher and a greatly gifted orator whose delivery of religious sermons (waz o tableeg)was so powerful and soul stirring that it was widely emulated by preachers across the valley, “It deeply affected those who listened to him spiritually , bringing them closer to Allah and making them take stock of their own deeds with a view to self improvement.”

Adding  that Mirwaiz was a multifaceted visionary who played a pioneering role in the educational and social upliftment of his people through the institutions he headed and also otherwise, and his contribution in these areas will always be recalled with respect and appreciation.Unfortunately many of his dreams for development of these sectors remained unfulfilled as his life was cut short .

APHC said that Mirwaiz Farooq was a man of peace who always advocated peaceful coexistence and friendship between the neighbouring countries of India and Pakistan and was among the first exponents of dialogue as a means of conflict resolution between the neighbors.

Hurriyat said that Lone was a heedful and fearless leader who sacrificed his life for his belief in a peaceful and pro people resolution of the Kashmir issue, “He was an intellectual who connected with the aspirations of his people and advocated it at wherever he got a chance to do so,”

APHC said that lone’s contribution in the formation of the people’s platform of All parties Hurriyat conference is pioneering and unforgettable .

It said that the collective Fateh Khawani and commemorative public rally to be held at the Martyrs graveyard in Eidgah to honour the leaders and the martyrs of Hawal stands deferred, in wake of the ravaging covid 19 pandemic second wave that hit J-K badly.

Besides All Parties Hurriyat Conference (APHC) chairman Mirwaiz Umar Farooq also continues to be under arbitrary house detention since August 2019 .

People are requested to offer fateha for the martyed leaders , the martyrs of Hawal and all those young and old men and women , who laid down their precious lives in the Kashmir struggle from 1931 till date.