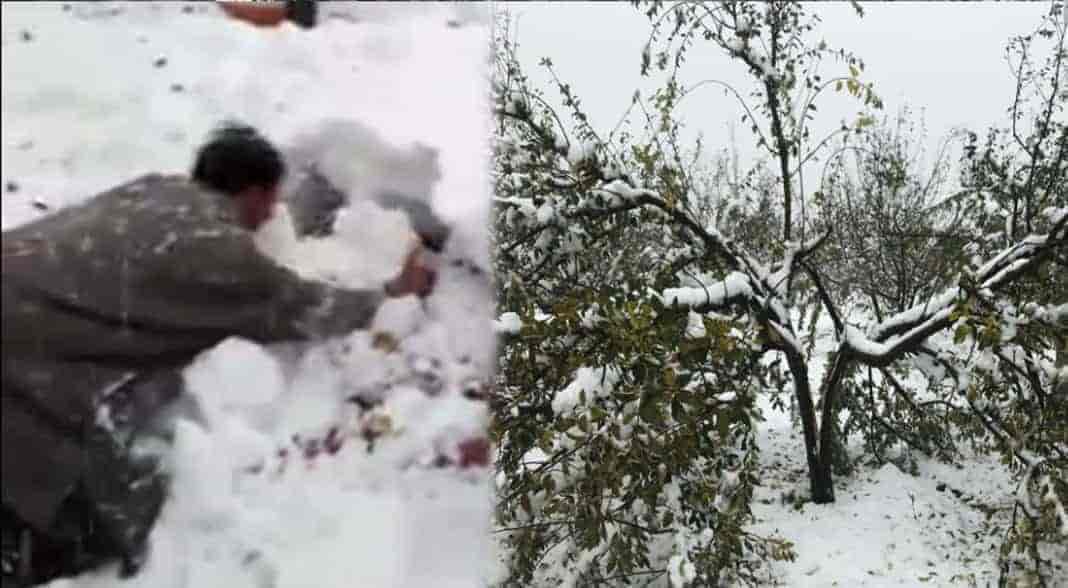 It has been after nine years that the Valley has received an unexpected snowfall again but this time it was more disastrous for farmers. Though, the sight of snow was delighting for tourists but has left a mark on the life of locals, who are wailing on what ruined their plans. “Oh, Allah! Why did this happen? It was our only mean of livelihood, we all depend on this,” a local is seen screaming in one such video from his snow-covered orchard in South Kashmir.

People say that there was no expectation of early snowfall so no one was ready for this coming disaster. It was almost out of their mind that such a calamity will again occur in the Valley as the locals were not warned about such weather conditions.

“We had not even imagined that this unexpected snow along with the rain will cause such a huge destruction,” said Manzoor Ahmad, on orchardist from district Anantnag. “This has not happened ever before in my life. There was such snow nine years ago but not as destructive like this year.”

The industry contributes a turnover of Rs. 12 billion per year to Kashmir’s economy with production of over 1.6 million metric tonnes annually. The Kashmir Chamber of Commerce and Industries (KCCI) has declared that the loss due to snow is around Rs. 5 billion.

Another orchardist from South Kashmir’s Anantnag district, Abdul Rashid, told The Kashmir Walla that he could not imagine he was going to witness such a huge loss the next morning. “But who knows what nature’s future game is. We have to bear it what else we can do or who can we blame for this?”

Many orchardists said that almost the entire south Kashmir was dependent on this business. “There is almost 60-70 percent damage to trees whose branches have broken and about 20-30 percent those trees that are fully damaged,” said Amir Ahmad, an orchardist from South Kashmir’s Pulwama district.

But Aamir claims that the losses are much high. “Only our Rajpora constituency has suffered a loss of Rs. 5 billion. We even lost twelve years old trees, it really needs efforts to build them again.”

For people like Aamir, the hard work they had been doing for rounds the year to fulfil their requirements of another year have in no time come to an end. When the apple growers saw the snowfall in the late afternoon on Saturday they rushed to their orchards to clean off their trees from snow. But it was too late for many of them.

For a person, an orchard takes over 12 years to bloom and give proper returns. Many plan building of their houses or marriages after the harvest season of orchards. The snowfall has devastated such plans for many in the Valley.

Mohammad Amin Wani, whose orchard is spread over an area of 2.25 acres of land, told The Kashmir Walla that he has a loss of almost 60 percent. “Our annual output used to be 2500 boxes of apple. We are all dependent on this business. The market for fresh apples is already down, so what will be the market of these damaged apples. The loss is huge and we cannot recover it in years,” said Wani, a resident of Dalipora, Pulwama district.

With growing demand of compensations from orchardists, political parties too have pitched in their voices. National Conference (NC) President Omar Abdullah said that the state government must depute revenue teams to the affected districts and assess the loss, so that they are compensated instantly.

The government led by governor Satya Paul Malik on Monday after taking guard of honor in civil secretariat Jammu said that the compensation will be given to those who lost their crops due to snowfall.