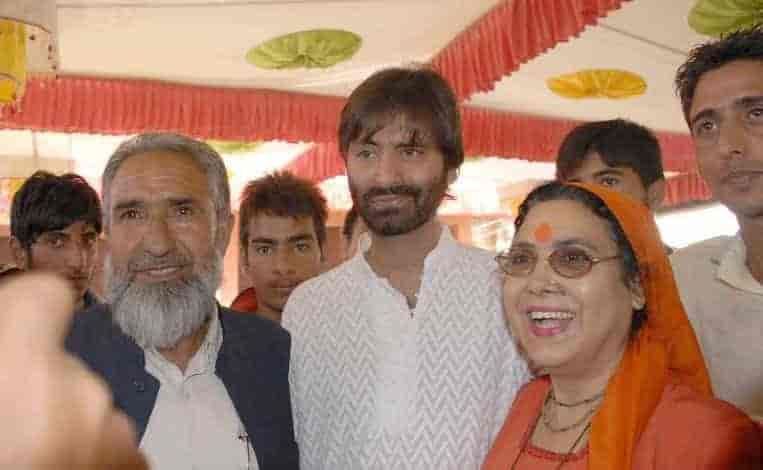 Kashmiriyat is a Muslim family breaking their fast in a Hindu home, in a housing colony on the outskirts of Haal near Shopian in South Kashmir. The date is Saturday, 5 July 2014. The host, Meenakshi Mattoo, hands out dates to her Muslim guests. This kind of camaraderie used to be a common tradition before the large-scale migration of the Kashmiri Pandit community from their conflict-hit homeland in the early 1990s. Earlier, Hindu and Muslim Kashmiris would celebrate Shivaratri and Eid together. In this way they shared culture, conversation and love. But the tide turned with the onset of violent rebellion and the foundation of this friendship was rattled.

The relaxed gathering near Haal was in stark contrast with the tense security arrangement around the exclusive settlement, set up by the state government to rehabilitate migrant Pandits. Although the colony was built to provide temporary shelter for Kashmiri Pandits, it feels like a home to them. Outside the house, children ride tricycles and play cricket. Clotheslines stretch across from one house to another. Vegetable patches line front porches, where family members are sitting on steps and chatting away.

But things aren’t all that great for the Pandit community. The issue of their rehabilitation hangs fire. About 200,000 of them fled in the 1990s and very few have returned. There is near-unanimity in the decision to reintegrate Pandits into Kashmir but this has not helped resolve sharp differences over the methodology of making it happen.

Mattoo shows me around her home. Now a local schoolteacher in her twenties, she lives with her brother and parents. There are two rooms, a bathroom and a kitchen. The electricity comes and goes. Everything is a little cramped and the ceiling has started to leak. “The walls are like cardboard,” says Sachan Bhat, Mattoo’s neighbor. They both think the place will start falling apart in the next three years.

The 65 living quarters in the colony house about 120 Kashmiri Pandit government employees from Shopian and Pulwama districts, who often bring their family along. Mattoo and her brother are both employed so they are allowed a living quarter to themselves. Otherwise, they are assigned on a sharing basis of four employees to one living quarter.

Mattoo’s family too had fled from the valley but unlike most migrants, her family returned four years ago.

From 1988-2001 there were a total of 47,234 rebel attacks in the valley. A segment of this violence was directed toward the Pandit minority community. According to some of the community members, they were threatened through notices, posters and calls from mosques. In many cases Muslim neighbors sought to dissuade them from fleeing their homes but to no avail. The central government of India didn’t try to help the community but instead it is said that the then state Governor, Jagmohan, facilitated transportation to let the Pandits leave. Some accuse that it was a well structured plan to make the Kashmir’s movement of self-determination into a communal war between two religious communities.

Kashmiri Pandits were torn between love for their homeland and their security. The message was heard, loud and clear – and so most Kashmiri Pandits fled. Telltale signs of the exodus are starkly visible in localities like Haal, near where the Mattoo family lives. Haal is a ghost town. A trail of wrecked houses is a grim reminder of its old grandeur: when dozens of thriving Pandit families inhabited them alongside Muslim neighbors.

The question often arises as to why the Muslim majority failed to do enough to dissuade Pandits from migrating en masse. This question has been used to perpetuate the stereotype of the “hate-mongering” Muslim who rejoiced at his neighbor’s departure. It overlooks the fact that the terror of rebellion was felt as deeply in the majority community as in the minority community.

Rebels assassinated Abdul Sattar Ranjoor, a Muslim and beloved poet and popular politician from an adjoining locality, for his ideological beliefs. Bhat recalls how this particular incident shook the entire Shopian area. “There was widespread terror. A lot of Muslims were also killed in this violence,” he affirms.

Even today, a part of Indian mass media is committing the mistake of perpetuating stereotyped jingoistic image of Kashmiri Muslims, against historical evidence. They polarize viewers, perpetuate a fear psychosis and add an unnecessary communal color to Kashmir politics. The hardline views of political non-entities are selectively amplified to frighten the minority community. No matter that a large majority of Kashmiri Muslims continue to favor the return of Pandits and their honorable rehabilitation. One has to come and visit Kashmir to feel the terrorized Kashmiriyat struggling to find its voice again.

Tragically, it is actually the failure of governance that is feeding negativity on both sides. The state and central governments continue to expose their sharp mutual differences on the modalities of migrant rehabilitation. All sorts of schemes and ideas are set afloat without serious follow-up or concrete action. As a result frustration among the migrants is growing, in addition to suspicions among the majority Muslim community, who fear underhand means are being adopted to alter the demographic composition of their homeland.

For the central government, the projection of the issue has always been dependent on the ideology of the ruling party. The Bhartiya Janata Party (BJP), now ruling the government in India, has made it clear that the return of the Kashmiri Pandits to the valley is a key item on their agenda, making them favorable among the community. But larger Kashmiri civil society continues to view the BJP with distrust; they see the party as tightening Delhi’s hold on Kashmir and undermining its autonomy.

After Iftar with the Mattoo’s, Bhat takes us to his home. Like Mattoo, he also returned four years ago and is a schoolteacher – a common profession among Pandits in the valley. He lives with his wife, parents and 3-year-old son.

We enter Bhat’s house to find one of his father’s old students in the living room: a Muslim with a beard, dressed in a kurta. He is being entertained by Bhat’s family and leaves in good spirits as we enter.

“Kashmiriyat is a bond of love,” Bhat says. He continues to cherish his friendships with his Muslim neighbors and says he was welcomed back when he returned in 2010. “Nobody wants to leave their motherland. Some soft corner always remains in the heart,” Bhat tells me. This soft corner kept tugging at Bhat to return, and so he did. Since his return he has not faced any untoward acts of social discrimination or violence.

Although Bhat thinks progress in terms of rehabilitating Pandits has been slow, he believes the government is taking preliminary steps to welcome them back.

Bhat says this wasn’t enough to allay the fears and emotional hurt of many of his Pandit friends. But he assures them that he feels safe and happy, and has for the last four years.

In addition to uncertainty about safety, Bhat says many Kashmiri Pandits have sold the land they used to own, some of them out of distress. Many Kashmiri Pandits in the younger generation have also gotten used to life outside Kashmir and coming back would mean adjusting to a new lifestyle and culture. Ambitious Pandit youth may find the valley’s economic prospects limiting. Yet, in an effort to persuade their fellow migrant Pandits to reintegrate into society, residents of the colony have extended the facilities of a local temple, which can now house a few families on a temporary basis.

Bhat believes the government also has its shortcomings in protecting the Pandit community. He is adamant that Kashmiri Pandits who didn’t sell their land should still have rights to them. He complains that the government has declared the land along Haal as Abadi Deh. Bhat says this dilutes their ownership rights and leaves it open to easy encroachment.

We discuss how the government should consider rebuilding and developing these abandoned homes, in addition to or instead of creating gated communities to house returning Kashmiri Pandits. This may be a more fearful prospect but it would also reintegrate Kashmiri Pandits into society in a more cohesive way. Bhat says the current young generation of Kashmiri Pandits has had very little exposure to the majority Muslim population. And so the mutual respect and warmth that used to exist has eroded, both ways.

In evaluating the plight of the Kashmiri Pandits we have to be cognizant not only of the emotional aspects, which most people see eye to eye on, but also the practical aspects. There is a lack of consensus about the how, what, when of the Pandit question between Pandits themselves and also between the state and central governments. Will Pandits live in separate enclaves? How will they be integrated into the local majority community? Indian Prime Minister Narendra Modi has announced there will be settlements but it is not clear whether these settlements will be segregated from the local community or located amongst them.

Confusion persists, as does agony, for the Pandit community; their plight is far from over. Structural solutions must be implemented to provide avenues for safety, employment and prosperity. Chief Minister Omar Abdullah recently proposed increasing the package for the return and rehabilitation of Kashmir Pandits. This includes the recent cabinet decision envisaging that Pandits who had disposed off their properties after migration but were willing to return to the valley would be resettled and rehabilitated in segregated clusters and wherever necessary, land would acquired from local residents for raising these clusters.

Still, it is likely that Kashmir will continue to be a political mess – not only for Kashmiri Pandits but also for their Muslim neighbors. But as long as Kashmiriyat exists, at least they can discuss their troubles, sitting side by side.