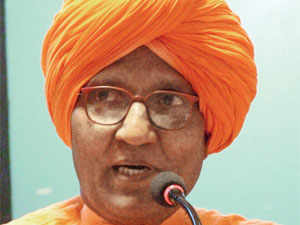 Demanding immediate closure of Amarnath yatra and stern punishment to the guilty responsible for setting the tents on fire at Base Camp Baltal, renowned Hindu religious scholar and social activist Swami Agnivesh Saturday, reiterated that he “does not understand why people go for such yatras” as the “Shivlingam” forms inside the Amarnath cave is simply a geographical phenomenon.

“Shivlingam formed inside the Amarnath cave is a natural phenomenon. It is surprising why people go with such a craze to see this ice formation in the cave. The formation is Geographical in phenomena which is called stalactite. Stalactite is a type of formation that hangs from the ceiling of caves, hot springs, or manmade structures such as bridges and mines. The Shivlingam like structures are common in European countries and I have myself observed such structures in Austria and Switzerland,” Agnivesh told CNS adding that it is only the blind faith and the wide spread propagation about the Cave that attracts number of yatri’s towards it.

Swami Agnivesh said that it is sheer luck of Shri Amarnath Shrine Board (SASB) that it is still able to mint money for conducting Yatra which needs to wound up once for all. “Each year we lose precious lives due to this Yatra which has become a money minting tool for SASB. Let me make it clear that there is nothing in those mountains and cave. People should not put their lives in danger by visiting there,” Agnivesh told CNS.

“Amarnath Yatra is a handy tool for SASB and Hindu extremists to exploit the sentiments of millions of Hindus across the country. How come it is possible that by visiting the Amarnath Cave, one could become pure?” he asked.

“Pilgrims are being flocked to Cave to die and we all know last year, so many people lost their lives there. I appeal pilgrims to understand the designs of SASB and Hindu zealots who propagate this Yatra in such a big way that every Indian gets attracted towards it,” Agnivesh said and added that it is better for Hindus to die in their homes instead of in the mountains of Amarnath.

Responding to a question, Agnivesh said that Baltal violence episode should be thoroughly probed and guilty should be booked. “People should not communalize this issue. Peace, amity and harmony must prevail but state government should compensate the poor people whose tents gutted in the violence,” he said and appealed people to maintain communal harmony at any cost. (CNS)