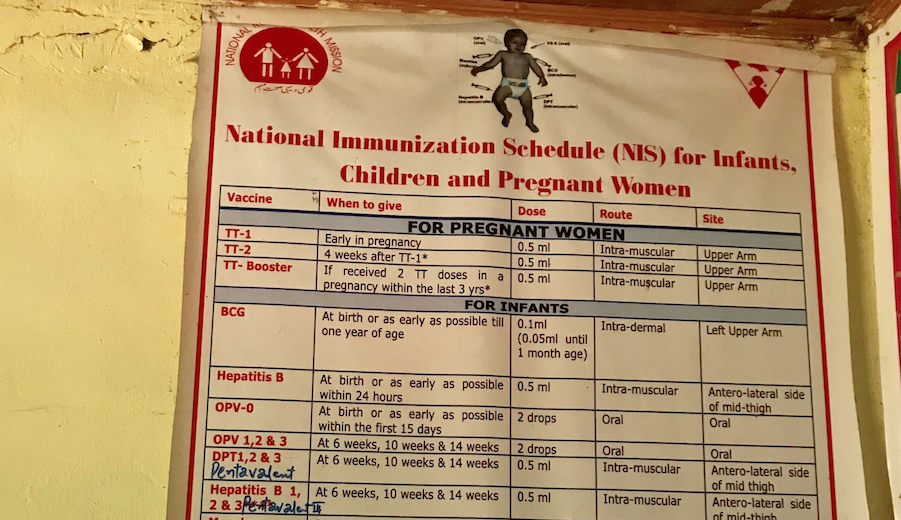 In the spring of 2016, panic gripped Srinagar as rumors of a child’s death following the government’s polio vaccination drive did the rounds. While confused parents rushed to hospitals wanting the vaccine reversed and health officials frantically tried to stymie rumors, the government’s two-decade old program achieved 75 percent vaccination of children under the age of two years in Jammu and Kashmir (compared to a national rate of 62 percent, according to the National Family Health Survey, NFHS-4).

This year, the Indian government launched its Measles Rubella Vaccination (MRV) immunization drive, targeting 4330000 children between the ages of 9 months-15 years in the state.

Historically, public health programs have often been mired by statecraft, owing to lack of trust in government. In the United States, the systematic denial of treatment to poor black farmers in the 30s, under the guise of the notorious Tuskegee Experiments, has done much to undermine the Black community’s trust in the US healthcare system, with several recent studies reporting lower trust among Blacks compared to Whites. Closer home, the fake vaccination drive organized by the American CIA in Quetta, Pakistan in an attempt to locate Osama bin Laden, saw the resurgence of polio in a country on track to eradicate the deadly disease.

Amid the backdrop of the now decades old militancy which has led to the categorical erosion of trust in Kashmiri society and fundamentally altered its relationship with the Indian state, the success of such state-run public health programs is indeed an interesting paradox.

How is trust built in a society where nothing seems untouched from the shadows of political violence?

In a small hamlet of about 400 families, mostly Muslim and Sikh, in Anantnag district (south Kashmir), Halima, a Female Multi-Purpose Health Worker (FMPHW), tells me that the task of regaining trust falls on frontline workers like her. As we chat in the cheery one room government sub-center in the village, established in 2013 under the National Rural Health Mission (NRHM) – its only resource for important primary health services such as vaccination, reproductive counseling, prenatal check-ups and first aid– Halima remarks that frontline workers like her who work despite the threat of militant and military encounters, the frequent hartals and the litany of verbal and physical abuse, are the backbone of healthcare in the state’s rural areas.

One of the most pervasive beliefs among rural locals, she tells me, is that “Parents bolte hain Modi ki chaal hai, bacchon mein (girls mein) infertility hoti hai.. yeh bolte hain Hindustan hamare saath aisa karta hai, uski chaal hai humein maarne ki! (parents say this is Modi’s (and Hindustan’s) calculated strategy to eliminate Muslims; to make girls infertile).” Not unique to Kashmir, such beliefs have been echoed among communities elsewhere, such as among the largely Muslim district of Malappuram in Kerala, which recorded a 35 percent MR vaccination rate in 2017. By comparison, Anantnag district has a MR vaccination rate of 84.9 percent, as reported by NFHS-4.

To gain parents’ trust, a somewhat amused Halima recounts that during the last vaccination drive, “Hamne apne bacchon ko diya pehle (we administered it to our own children first).”

Currently, Kashmir employs 1794 FMPHWs, facing a shortfall of 488 workers to meet the state’s needs, according to data from the Department of Health and Medical Education. With a total of 1907 government sub-centres (per the department’s website) serving a rural population of 3000 persons per center, untangling statecraft from state services is no small feat for Kashmir’s healthcare workers, and sometimes involves, literally, swallowing the bitter pill.

During the annual de-worming drive held in August this year, Halima and Rupinder, another rural health worker from the village, tell me that parents refuse to participate in the government’s deworming drive because, “humne suna hai yahan private agencian aati hain, dawaiyan lekar (we’ve heard there are private agencies infiltrating Kashmir with medicines).” To get parents’ buy-in, Halima recalls, “humne din mein teen tablet khayi khud (we ate 3 tablets in a day), phir auraton ne trust kiya (following which the women trusted us).”

Lately assisting with the enumeration of households for the implementation of the newly launched Ayushman Bharat National Health Protection Mission, Halima tells me that from visiting every household with registers for data collection, to maintaining detailed records, everything is done manually. “Jab award milta hai to BMO sahab aage jaata hai, but dawai khaane woh thodi aage ayega! (The BMO isn’t at the forefront of taking the medicines himself to gain trust, but he gets the recognition),” laughs Halima when I ask her what will help their work. It isn’t recognition they seek at this sub-center, but an electronic machine to record and maintain data, “taaki hum aur kaam kar sake (so we can work more).”

Often short staffed and always underpaid, workers like Halima are not only regaining public trust while bringing important services to people in far flung areas of the state, but ushering change. At this particular center, healthcare workers report increased contraceptive usage, greater gaps between multiple pregnancies and an uptick in prenatal care as well. Where mistrust runs so deep, the success of the NHRM is not only driven by the trust Kashmir’s frontline workers build but seems to depend on it.

Khushdeep Kaur Malhotra is a PhD candidate in Geography and Urban Studies at Temple University, currently completing her dissertation fieldwork in south Kashmir.