Have five children, give weapons to all of them: Hindu leader in Jammu 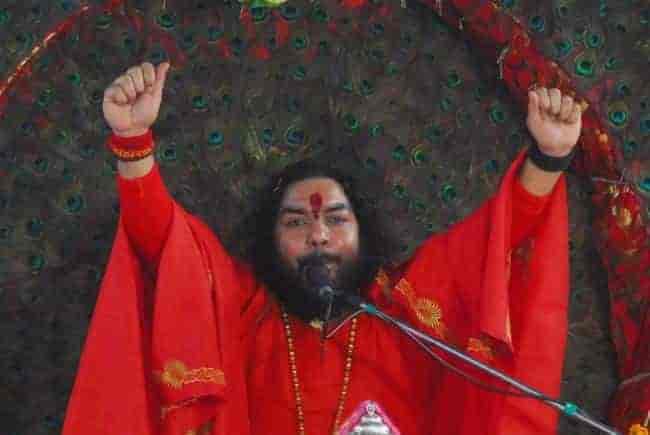 Mahant Dinesh Bharati, who was a prominent face of the 2008 Amarnath agitation,has  said that Hindus should have five children each and that they should all be armed, Indian Express reported.

Bharati was addressing a dharam sabha organised by the Vishwa Hindu Parishad in Jammu Sunday, where Swami Jagadguru Hansadevacharyaji, head of the Akhil Bharatiya Sant Samiti, an umbrella body of Hindu seers, was the chief guest. State BJP chief Raina and former ministers Sat Sharma, Sham Choudhary and Chander Parkash Ganga were in the audience.

Ganga was among two BJP ministers in the previous Mehbooba Mufti government made to resign after they visited a rally held by family members and relatives of men arrested for the rape and murder of an eight-year-old girl in Kathua.

“(I have a request. Each Hindu should have five children and weapons should be given to all five children and they should take a pledge that if anybody looked at them with evil intentions, they will cut out their eyes).”

Asking Hindus to ensure that a palatial Ram temple is constructed at Ayodhya, Bharati also said that no force on Earth could stop the construction of a Ram temple at Ayodhya. In his address, Jagadguru Hansadevacharyaji asked the Centre to bring a Bill on the Ram temple in the current session of Parliament.

Governor Satya Pal Malik’s advisor K Vijay Kumar told The Indian Express: “We are examining the speeches. We will seek legal opinion. If there is anything unlawful, necessary action will be taken.”