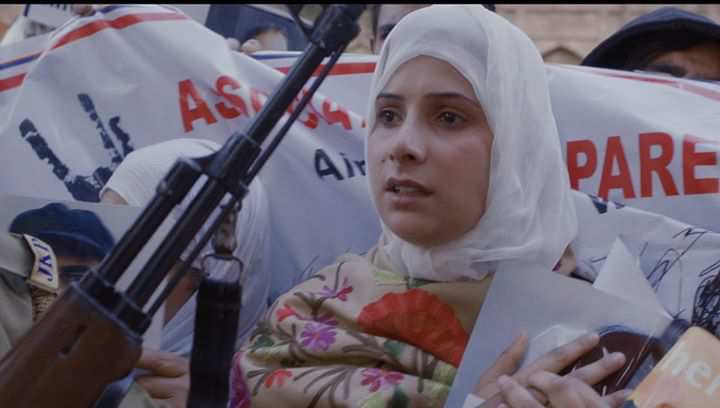 A film by Danish Renzu and Gaya Bhola

In the majestic Himalayan mountain range that spans India from the North all the way to the East, we focus in on the incredibly beautiful state of Kashmir in the North, the abode of Mystics and artisans but also raked with political turmoil. The land where tourists flock for vacations and it was a sought after landscape for decades, for many Bollywood movies.

Neela, a Kashmiri beauty in her mid 20’s is in the marketplace shopping for her wedding. Orphaned at a very young age she lives with her Aunt along with her brother, Zakir. They know what love is, growing up with their Aunt who they call ‘Khalla’.

Shy, but with a longing in her heart she ventures out to meet her fiance Khalid. He invites her tenderly into his paper mache’ workshop where they sip tea together. It is a warm tender love. A love that Neela knows, growing up with Khalla, loving and bonded. A love that spells, ‘family’.

In a simple loving ceremony Neela and Khalid get married with Khala’s blessing. Seeing Zakir’s great pain at Neela’s departure, Khalid insists on Zakir living with them. The sister and brother are bonded in love and life and they have survived together. He understands. They set up a simple middle class home where they live with an abundance of love. With Neela’s warmth, her home made food, her pregnancy and his paper mache artistry, Khalid is a satisfied man. Home is a sanctuary for their hearts and life goes on.

The political fever in Kashmir starts to rise. There is broken sentiment. Some favor Indian Kashmir being integrated with Pakistan, some favor Kashmir as an independent state. Emotions run high and the Indian Army is present everywhere. There is frequent terrifying frisking of locals to determine the people’s sentiment. Khalid is not politically oriented. He is an artisan whose business of paper mache ‘thrived in the tourist industry, which has now greatly reduced due to the political turmoil.

The political unrest then took on a greater magnitude. The frisking of local people was no more a random event. It was taking place on a regular basis. Word started to spread about the torture and disappearance of many males. The terror was spreading.

On one fateful night, while enjoying a meal with Neela and Zakir, great commotion ensues as fierce, hooded men enter their home and drag Khalid away, with a protesting Neela. Helpless and heartbroken Neela and Zakir stare at Khalid’s unfinished meal. Unable to contain the tragedy, Neela miscarries their child.

Will Khalid ever return? Desperate, she wanders through graveyards looking for some evidence of her husband. She sees many protests through the streets. These women are being called ‘Half Widows’. They do not know if their husbands are dead or alive. The cries of these women pierce the skies. Neela’s heart is numb. She does not know what to do next. Life without Khalid is unbearable. Zakir knows his sister is very vulnerable and stays close. He has made up his mind. His sister will always stay with him.

Many years pass. The wound runs deep in the society. Thousands of homes had been destroyed. A political activist, Parveena Ahanger helps hundreds of these ‘Half Widows’ to move into shelters. Islamic law states that if your husband doesn’t return in 3 months, the marriage is dissolved. Years had passed and it was declared that Half Widows could remarry.

In Neela’s heart Khalid is not replaceable. Zakir was enraged when the Half Widows suggested Neela take shelter with them. He declared emphatically that he would take care of his sister. She could live with him forever. He expressed his disgust at the label ‘Half Widow’. Did that suggest they were incomplete human beings? Were they not complete in themselves?

How does Neela find meaning in her life again? Her life is changed forever and she must change forever. What does that mean? What does she discover as her limitations? What must she resurrect? What is the meaning and purpose of her life now? What would satisfy her? What would it mean to live on?

Half Widow is a feature film starring Kashmiri local actors, including Neelofar Hamid (who appeared in the Sundance Award-winning film Valley of Saints), Shahnawaz Bhat (from Harud), and Mir Sarwar, produced by Gaya Bhola and Danish Renzu, co-produced by Rhonda Leal,and directed by Danish Renzu.