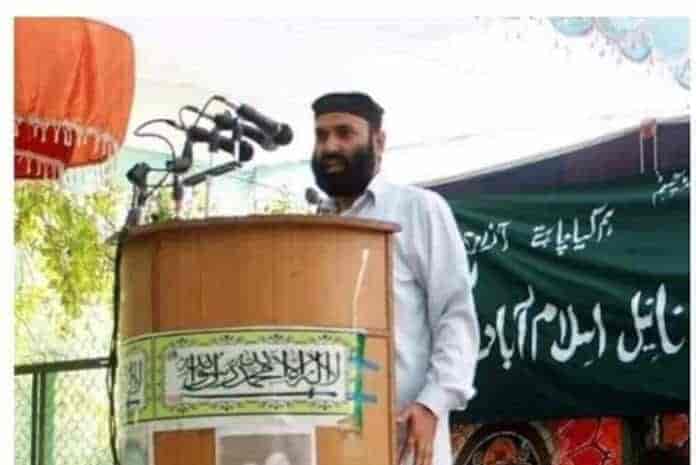 Ummat e Islami on Thursday visited the house of Mir Hafizullah for the second time to express their solidarity with the family of the slain Hurriyat leader and termed his killing as deep rooted conspiracy.

In a statement issued here the spokesperson said that the team  which was headed by Waheed Ahmed khan called the murder of the slain leader as a deep rooted conspiracy.

Adding that the Party also visited the family of Yawar Ahmed Wani, cousin of Ummat e Islami leader, Aijaz Ahmed Noori at Batnoora Pulwama who was killed in an encounter with Government Forces on 11 November. “The team expressed condolences with the family and hailed the sacrifices the family has made for the cause of Freedom of Kashmir.” He said.

Addressing a gathering of mourners at the home of the slain leader Hafizullah, Gulzar Madni called the murder of the slain Hurriyat leader as a deep rooted conspiracy and said that the slain was a core part of the investigation team investigating the allegation against the Chairman of Ummat e Islami, Qazi Ahmed yasir. He said that the”beloved” leader had served the cause of Freedom selflessly and had spent most of his days in Jail. “His services to the cause of freedom for Kashmir are unmatched. He was a mature politician who understood the conspiracies of the agencies,” the spokesman quoted Madni as saying.

Ummat e Islami team lead by Yawar Barkati also visited the house of slain militant Nawaz Ahmed Wagay in Reban Shopian where Yawar said that educated youth picking up guns is an answer to all those who think guns are a result of ignorance. “He said Indian state must leave its ignorant and arrogant approach on Kashmir issue and resolve the issue at the earliest.” Spokesman added.

The Party also held a condolence meet at Qazi Manzil where the spokesperson demanded the release of Qazi Ahmed Yasir and said that all allegations against Qazi Ahmed Yasir are being investigated thoroughly and the process is in its final stage. Saying that technology has reached its zenith where it is not a herculean task to morph audios, photos and Videos, he said all the people who are involved in the conspiracy will be dealt by Public sternly.

“A handful group of people paid by some wealthy men and a few agencies are wanting to orphan south Kashmir’s freedom struggle, which will not be allowed anyway,” he said.

He demanded the release of Qazi Ahmed Yasir and Aijaz Ahmed Noori whose detention is being prolonged by Indian Forces in Pulwama and other Political prisoners.