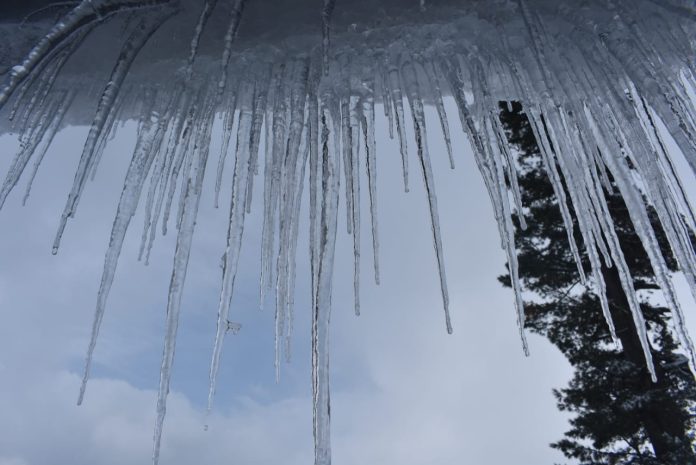 A meteorological department official here told GNS that Srinagar, the summer capital of the J-K, had 0.8mm of rainfall during the last 24 hours till 0830 hours today and recorded a low of 2.2°C against last night’s 2.8°C, he said.

Qazigund, the gateway town of Kashmir, had no rain or snowfall and recorded a low of 0.6°C against 1.2°C on the previous night, he said.

Kokernag, also in south Kashmir, had a low of minus 1.3°C against 0.1°C on the previous night, the official said.

Pahalgam, the famous resort in south Kashmir, received 11.3 cms (around 4.5 inches) of fresh snowfall and recorded a low of minus 0.5°C against minus 3.7°C last night, he said.

The temperature was 0.7°C below normal for this time of the year in the famous resort in north Kashmir’s Baramulla district, he said.

Kupwara town in north Kashmir, which received 6.9mm of rain, recorded a low of 0.7°C against 1.1°C on the previous night, the official said.

Jammu received traces of rain and recorded a low of 10.5°C against previous night’s 6.6°C, the official said. The temperature was 1.0°C above normal for the J-K’s winter capital during this time of the year, he said.

Ladakh’s Leh recorded a low of minus 11.0°C against last night’s minus 11.4°C while mercury at automatic station in Kargil settled at minus 12.5°C.

Drass, the second coldest place in the world after Siberia, recorded a low of minus 10.9°C against last night’s minus 17.9°C, official said.

The weatherman has forecasted “erratic weather” with occasional snowfall at scattered places till February 8. (GNS)