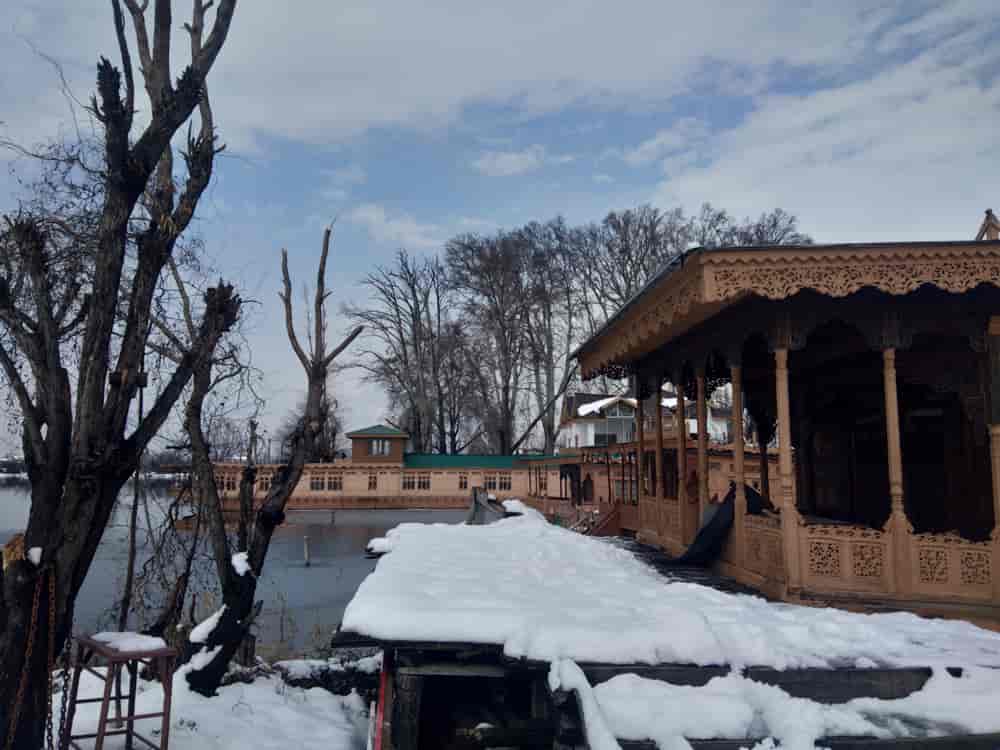 On a bone-chilling January morning in Srinagar, the picturesque Nigeen Lake surrounded by snow-capped Zabarwan mountains – glitter as sunlight kisses its surface. Unmindful of the biting cold and his old age, Ali Mohammad Baktoo, employing a traditional wooden oar, is busy clearing the snow off his houseboats from the previous night.

“Don’t go after the glitter – it is just a mirage; beneath it, lie dirt and algae. All the drains of the city flow into it,” laments Mr. Baktoo, pointing towards a number of drain outlets, which enter the lake. “As far as your eye can see, there are drainage-openings spilling into the lake.”

At 73, Mr. Baktoo isn’t just another Kashmiri elderly man; he doesn’t wear a pheran nor does he carry a kangir. Instead, he wakes up early in the morning beating the cold and gets to work. “It is not easy to have a houseboat and making sure it isn’t damaged,” said Mr. Baktoo, as he cleared the decks of his houseboat, sarcastically adding, “That too, when people are enjoying snow.” His 43-year-old son was up all night to make sure the houseboat and the alleyways leading to it were clear.

Born in March 1946, a year before India attained freedom from Britain, in Srinagar’s Chinar Bagh area; Mr. Baktoo been through eventful decades and he has seen the regional lake bodies – which garner worldwide attraction – from its days of skies to ashes.

He has been living by the lake all his life, in Nigeen area, and perceives the lake as his “lifeline” and houseboats as its “beauty.”

In a fluent English conversation with Mr. Baktoo, his fondness for the lake spills in his almost every sentence. “This lake is unique as it does not receive water from other water bodies, but sixteen springs, which are behind its origin,” he says, swearing upon the lake’s pristine nature.

If one wonders how Mr. Baktoo knows this, he recalls the time when water was frozen and they counted the bubbling hot-water springs. “This lake is connected to Manasbal Lake,” he says, disclaiming that he has learnt this from his forefathers but has not seen for himself.

Back in his childhood, as Mr. Baktoo recalls, the foreign nationals were mesmerised by the beauty of the lake and set a camp nearby in Mirza Bagh. “They [Tourists] would come in from Rawalpindi [Now, in Paksitan] – which was once a trade destination for Kashmiris – in tourists’ vans, jeeps, cars etc., for three-to-four months,” said Mr. Baktoo, adding that motor vehicles were a rare sight back then.

In the day, the lake would colorfully scatter sunlight and by night, a serene silence would take over. His forefathers, fishermen by profession, would show the tourists around the lake in small boats, or dongas. Impressed by its beauty, as Mr. Baktoo narrated, the foreign nationals poured in money and the houseboat became an indivisible part of the culture.

As far as Mr. Baktoo’s memory goes, it were foreign nationals who suggested owners to move their houseboats from Dal Lake to the Nigeen Lake. “In around early 60s we moved our houseboats to Nigeen for four months and rowed back to Dal [Lake] in winters, and then after a few years we permanently shifted them here,” he said.

At the prime of its beauty and days, Mr. Baktoo remembers local populace drinking water from the lake. That doesn’t happen anymore due to pollution.

Head of department (Earth Sciences) at University of Kashmir, Shakeel Ramshoo, agrees that a major issue in the lake is untreated sewage. “Nigeen lake is a deeper portion of Dal Lake and it should not have such pollution as deeper the lake, lesser the pollution,” he notes. “Be it kitchen waste or toilet waste of the city, it goes untreated into the lake, which leads to pollution.”

These factors have led to an increase in coliform count, the fecal matter that has made the water non-potable unfit for drinking purposes. Another factor leading to lessened water level in the lake is aquatic vegetation. “Since there has been no dredging in the lake, the depth has reduced due to segmentation in the water body in form of waste.”

“It [Nigeen area] was a jungle; it is due to our efforts that Nigeen is home to tourists now,” says Mr. Baktoo, and adds that in 1980s, tourists had to book reservations three-months prior to arrival. “It was a paradise – no pollution but only serenity and calmness.”

“There were three boats known as Bedi boats for water skiing and one for sailing,” recalls Mr. Baktoo. “Championships would be held every year. In the evening the lake would look like Europe!” He doesn’t remember a foreign national saying a goodbye; they would always tell Mr. Baktoo, “We will come back.”

Though the unstable regional politics in the late 1980s also affected the lake and started the beginning of an end; in 1989, after the inception of militancy, “all the mess started.” “Most of the foreign nationals stopped coming in after their governments hesitated in providing travel insurance,” says Mr. Baktoo. “Kashmir became a flashpoint in the world and foreign governments told their citizens that it is unsafe to travel to Kashmir.”

He recollects that following the turmoil in the Valley, only a few people visit the lake. “After the inception of militancy a few tourists would visit us. Say 10-15 per cent would visit and they would mostly be home tourists, the ones that would be funded by government. After 5 August 2019, not a single tourist has visited us. Everything is empty here,” Mr. Baktoo said in disappointment.

Other than conflict, he also holds Lakes and Waterways Development Authorities (LAWDA) and other authorities responsible for the degradation of the lake from his place of experience. “Officers, who don’t know what a houseboat is, are saying that they will get rid of houseboats here,” he laments. “Houseboats add to the beauty of this lake, they should know. Everybody [in government] is corrupt.”

LAWDA machines that were implemented for cleaning the lake damaged the lake the most, Mr. Baktoo claims. He explains how these machines would trim the weeds and leave everything else there, which causes further damage as roots would not be excavated.

“Government has not done enough to keep this lake clean and they should seek our suggestions,” he says. “We would tell them how they can keep it clean.”