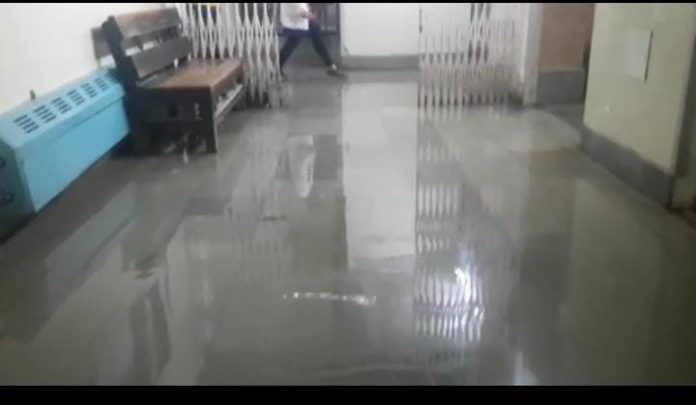 Amid incessant rains, the ground floor of JVC Hospital in Bemina has got water-logged even as several low lying areas in outskirts of summer-capital Srinagar are witnessing inundation.

A local news agency, Global News Service (GNS) has received several calls from attendants at JVC Hospital who unequivocally maintained that ground floor of the hospital has got inundated even as more water was seeping into the compound area.

They said that presence of water inside the hospital building and its premises have made it highly difficult for them to move around. “We are unable to procure the required medicines”, an attendant said.

When contacted, Medical Superintendent JVC Hospital Dr Shifa Deva said that water has got accumulated inside the hospital compound. “This is low lying area and water does enter the hospital every time it rains heavily”, she told GNS.

“Men and machinery are on job to remove the water,” she said, adding, “It will recede when rains stop.”

Regarding the lift system, the Medical Superintendent said the lift system is not working from yesterday as the mother board has developed some snag. “We have asked for a (mother) board from outside and the issue will be possibly fixed soon.”

“We are on it and will do every possible thing to help the patients”, she further said.