Greta meets Malala: “The only friend I would skip school for” 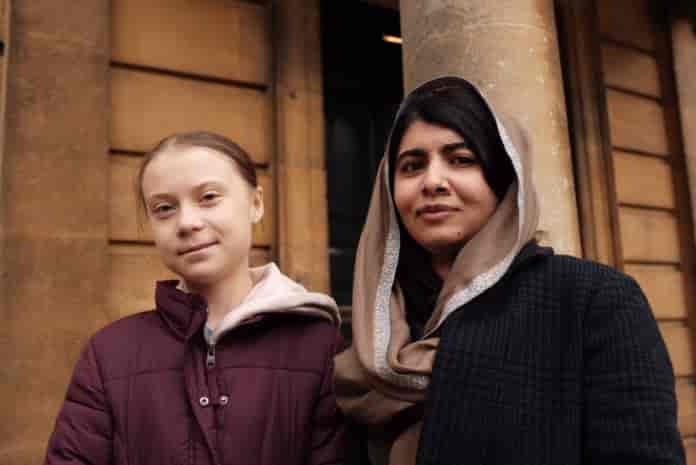 Teen climate activist Greta Thunberg met Nobel Peace Prize winner Malala Yousafzai at Britain’s University of Oxford on Tuesday and posed for a photo together.
Yousafzai, widely known by her first name, Malala, is a student at the University of Oxford. The 22-year-old posted a photo on Instagram of herself and Thunberg sitting on a bench with their arms around each other, with a caption “Thank you, @gretathunberg” and a heart emoji.
In a tweet, Malala said Thunberg is “the only friend I’d skip school for”.
“So… today I met my role model. What else can I say?” Thunberg tweeted with a couple of pictures of the duo.
Both women shot to worldwide fame after standing up for major global issues: climate change and women’s education.
Thunberg became a household name after skipping school in Sweden to protest against climate change, while Malala was shot in the head by the Tehreek-i- Taliban Pakistan (TTP) in Swat for campaigning for girls to be allowed to go to school.
In 2014, Malala became the youngest recipient of the Nobel Peace Prize for her advocacy of education. She became a global symbol of the resilience of women in the face of oppression.
Thunberg was nominated for a Nobel Peace Prize in 2019 and 2020.
The pair met to discuss their activism at Lady Margaret Hall, Malala’s Oxford college. Thunberg also talked to some of the students about climate change and protest.

Previous articleI appeal to my brothers and sisters of Delhi to maintain peace and brotherhood: PM Modi
Next articleDelhi violence: IB officer’s body recovered from drain by police