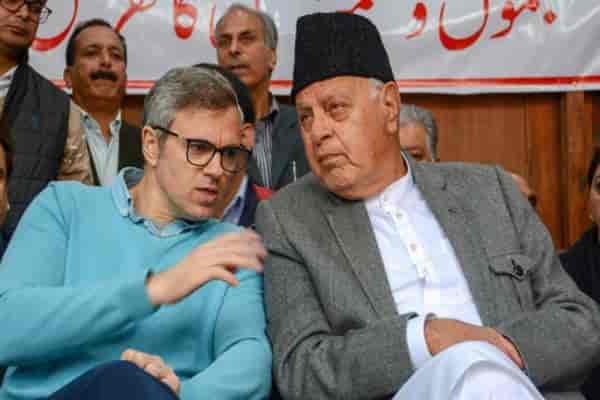 Former chief ministers Farooq Abdullah and Omar Abdullah have been named by the Jammu and Kashmir administration in a list which alleges that their residential house in Jammu is built over illegally-possessed land, a charge denied by the father-son duo, reported Press Trust of India.

The administration of the union territory as directed by the Jammu and Kashmir High Court to make public land given under the controversial Roshni land scheme, since scrapped by a court, came out with the list of beneficiaries. On Tuesday, it came out with a list of those who had allegedly encroached land other than those given under the scheme.

The list also highlighted the headquarters of their National Conference in both Srinagar and Jammu were legalised under the controversial Roshni Act.

Displaying the lists on its website – one showing encroached land outside Roshni Act, the divisional administration Jammu revealed that the residential house of the Abdullahs, build over an area of nearly an acre at Sunjwan, is encroached state land (physically encroached but not shown in revenue record) other than Roshi Act.

Reacting to the fresh list, party vice president Omar Abdullah said, “The news attributing to sources that Dr Farooq Abdullah is a beneficiary of the Roshni Act is completely false and is being spread with a malicious intent. Both his houses at Jammu and Srinagar have nothing to do with the said Act.”

“Dr Farooq Abdullah has NOT availed of the Roshni Scheme for either his residence in Srinagar or in Jammu and any one who says otherwise is lying. The fact that they are using sources to plant this story shows that it has no legs to stand on,” Abdullah said.

The house of senior Abdullah was built in late 1990s for which timber was allocated from the government depots, which is issued only after furnishing all revenue records, officials in the know said.

Earlier, three former ministers, several politicians and a former bureaucrat figured in the list of beneficiaries who have availed land under now scrapped Roshni Act or encroached state land for residential or commercial purposes.

The lists were made public by the divisional administration, both in Kashmir and Jammu regions, in accordance with the October 9 directive of the high court which has declared Roshni Act “illegal, unconstitutional and unsustainable” and ordered a CBI probe into the allotment of the land under this law.

Issuing the first list of 35 beneficiaries who included former finance minister Haseeb Drabu and some top hoteliers and a former bureaucrat, the divisional administration Kashmir showed that National Conference headquarters, several hotels and over a dozen commercial buildings at prime locations in and around Lal Chowk have been regularized under the act.

Majority of the beneficiaries including Drabu and his wife have one Kanal of land under residential use, while Congress leader K K Amla is the owner of Broadway hotel and prominent businessman Mushtaq Ahmad Chaya owns a guest house and a hotel.

On November 1, the Union Territory government cancelled all land transfers that took place under the JK State Land (Vesting of Ownership to the Occupants) Act, 2001 – also known as the Roshni Act – under which 2.5 lakh acres of land was to be transferred to the existing occupants.

The principal secretary and revenue department has been asked to work out a plan to retrieve large tracts of state land vested under the Act. According to the high court order, a total of 6,04,602 kanals (75,575 acres) of state land had been regularised and transferred to the occupants. This included 5,71,210 kanals (71,401 acres) in Jammu and 33,392 kanals (4174 acres) in the Kashmir province. The actual land that was transferred was 3.48 lakh kanals — 3.15 lakh kanals in Jammu, 33 thousand kanals in Kashmir.

According to the order, complete identities of influential persons, including ministers, legislators, bureaucrats, government officials, police officers and businessmen, their relatives or persons holding benami for them, who have derived benefit under the Roshni Act will be made public within a period of one month.

Mohammad Shafi Pandit and his wife own two residential houses in the prime location of the city, the document said, adding a total of over eight acres of land was vested to the beneficiaries, who also included several other relatives of Drabu.

In Jammu region, two separate lists were displayed by divisional administration Jammu on its website — one related to Roshi Act and the other showing encroached land outside Roshni Act.

Among the beneficiaries of the encroached state land of about three and a half acres in Bahu Tehsil (Physically Encroached but not shown in Revenue Record), the list included former ministers Sajjad Kitchloo (National Conference) and Abdul Majid Wani (Congress), NC leaders Syed Akhoon, and Aslam Goni and former chairman of JK bank M Y Khan.

Another list of 383 people, belonging to majority community, were shown under possession of over 483 acres of encroached land in Maria Mandrian tehsil of Jammu district, while 854 beneficiaries having possession of over 370 acres in Jammu south and 15 others in Jammu west.

Under the Roshni Act, two retired superintendents of police Shiv Kumar Singh and Mani Lal were among 10 beneficiaries in Bahu tehsil. The list included government employees and businessmen and the total land involved is about over five acres.

As many as 419 people, mostly farmers belonging to majority community, have been vested powers of 405 acres of agriculture land under Roshni act in Khour tehsil and 97 others in Nazool tehsil over over four acres of land, the list highlighted.

The Jammu and Kashmir state lands (vesting of ownership to the occupants) act was enacted in the year 2001 with the twin objective of generating resources for financing power projects and conferment of proprietary rights to the occupants of the state land.

The act popularly called as Roshni scheme initially envisaged conferment of proprietary rights of around 20.55 lakh Kanals (102750 hectares) to the occupants of which only 15.85 per cent land was approved for vesting of ownership rights.

The scheme was finally repealed by the then governor Satya Pal Malik on November 28, 2018.

Amid reports about its widespread misuse, the entire legislation was challenged before the JK high court, in a public interest litigation, wherein the court besides staying the proceedings under the said act also directed that neither the occupants having been conferred upon the ownership rights shall sell these lands nor can raise constructions on such lands.

In 2014, however, the Comptroller and Auditor General had estimated that only Rs 76 crore had been raised from the transfer of encroached land between 2007 and 2013.