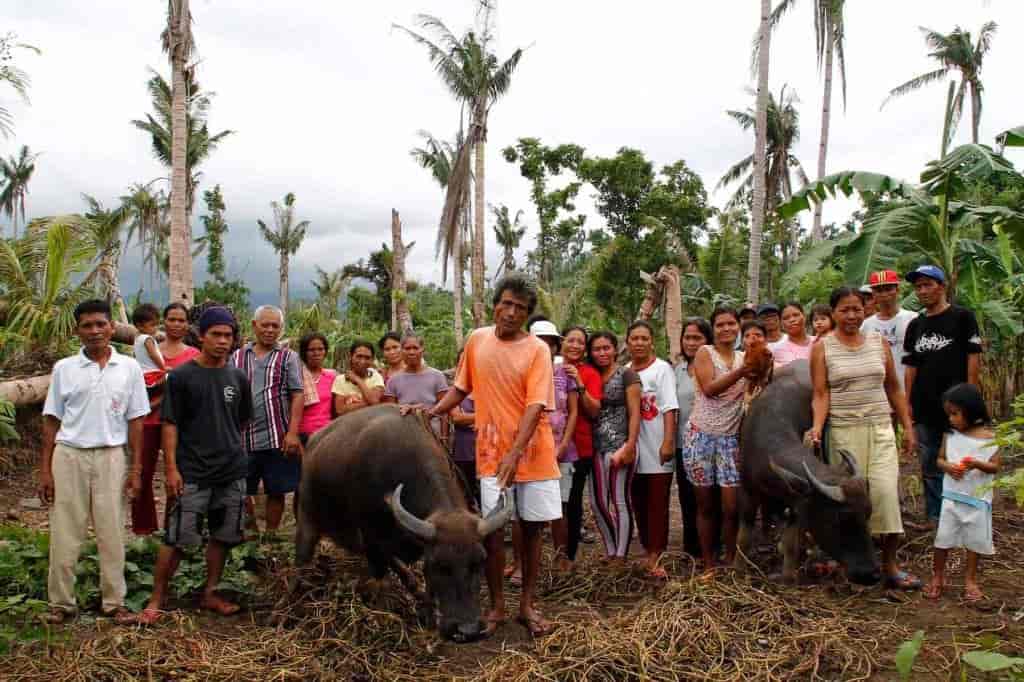 Typhoon Haiyan, the strongest tropical cyclone ever recorded is know in the Philippines as Typhoon Yolanda, this typhoon devastated the Philippines and portions of South East Asia on 8 November 2013. The deadliest and the strongest storm ever recorded, killing at least 6,300 people in Philippines alone, with an estimated 3000 plus bodies still missing. As of January 2014, bodies were still being found. The epicenter of the typhoon was the island of Talcoban and the area of Leyte.

Farm workers in a village in Leyte remain clueless where to look for their livelihood while struggling to take back control of their lives after TS Haiyan (local name: Yolanda) devastated their sole source of income—copra from coconut trees.

Amid the billions of pesos for aid that was granted to the Philippines government from different international humanitarian organizations, the resilient survivors seem to be waiting to receive their share in aid.

“I can’t think of any livelihood to sustain the basic needs of my family,” said Michael Andrade, a farm worker in the village of Canbañez, Leyte province, the epicenter of the Typhoon.

Andrade is a hard working father of two children and a husband to his unemployed six months pregnant spouse, Analyn Suyom. Suyom attains to the needs of her children while Andrade goes to work and searches for their livelihood.

He said after Haiyan their main source of income, which is selling copra was completely gone after strong winds either damaged or uprooted the coconut trees rendering it unable to bear fruits.

“Before Haiyan, I can earn around P2,000 in a week during harvest season. Other than that, I used to sell tuba (coconut wine) for extra income,” Andrade said, adding that all their income sources was taken from them by the typhoon. He said his monthly income would top at P2,000 per month.

“It’s not enough. It’s far from being enough. If it is enough I shouldn’t be having any debts right now,” he said. He added that all of his income would not suffice for his family’s basic needs.

Andrade said poverty is prevalent in the village since the livelihood of the residents is gone. He added it is hard for them to find alternative income sources for food.

“Although we can still work as rice farm labors, it cannot offer us a lots of working days,” he said. Times and work days are subject to constant change. More’s the pity; he added they do not own the farm lands, nor do the folk from the village, the farm owners are outsiders so the majority of the money leaves the village.

Andrade’s neighbor, Emerita Lopez 54, goes to the municipal center almost every day to sell vegetables from their backyard garden. “Although I am old I can still manage to plant vegetables so I can sell them at the market and buy other needs for the family,” Lopez said.

She adds her income would only range from P100 to P200 per day. With that, she added it could buy her a few kilos of rice and other daily needs for the family.

“Rice from my income would not suffice for our daily needs. But I usually mix it with other root crops like cassava and sweet potato so it would be enough,” she stressed. Lopez added she is not ashamed nor disheartened if she needs to go back every day to sell her vegetables at the market for the families sustenance.

Same as the other poor communities in the municipality of La Paz, Leyte, the village has 126 households with a total population of 550 individuals who used to rely on copra and rice farming for their livelihoods. Now most of the residents are coconut and rice farm workers who earn almost the same—P150 per day at least three times a week.

The government received billions of pesos from international humanitarian organizations to support Haiyan survivors. However, their support through the Department of Social Welfare and Development (DSWD) remains unseen by the survivors.

“The DSWD provided us food packs from January to February only,” Andrade said, adding that non-government organizations provided them shelter and food aid thereon.

Andrade and Lopez were both beneficiaries of food packs and shelter repair kits from different non-government organizations.

Andrade added that DSWD implemented their cash-for-work program in the village last May 22, 2014. And it was the only time they got something from the government after the food packs.

Lopez has a similar experience with Andrade. She said if our wage will come it would be like nothing because we already spent its worth through debts. “But until today, I have not received any updates regarding the cash-for-work,” she said, adding that the money would be all for debt payment.

In a television interview, representatives from the government promised to release hundreds of billions for rehabilitation and recovery of Leyte. But until today, the government’s duty to support the recovery of the survivors remains unmet.

Through an oral intervention delivered before member states of the United Nations Human Rights Council in Geneva on June 20, Haiyan survivor Rev. Irma Balaba of the National Council of Churches of the Philippines strongly urged the Council to conduct investigations into the “slow, inefficient and inadequate response of the Philippine government to the plight of the millions of typhoon Haiyan victims.”

In the said statement supported by the Commission of the Churches on International Affairs of the World Council of Churches (CCIA-WCC), Balaba recounted that “thousands of desperate and traumatized residents fled the regions affected by the typhoon, as its impact on the affected communities exacerbated the poverty incidence and intensified the number of displaced victims in the Philippines.”

“Up until now, the government does not have an alternative plan for the displaced communities that would ensure their long-term alternative livelihood, safe relocation areas, free housing and access to social services,“ she added.

Balaba also urged the Council to monitor and investigate how the assistance extended by the international community for relief and rehabilitation in the devastated areas, amid the massive pork barrel and corruption scandals under the Aquino administration.

While the people’s money intended for recovery remains suspended, support from various non-government organizations becomes less and even non existent in some villages.

Worried for the coming days, Andrade laments, “We are not expecting anything. Nobody told us that they (non-government organizations) will support our recovery.”He added poverty still haunts them and “finding money for food and education” remains a big problem to them.

Anjo Bacarisas writes human writes and development stories for www.rmp-nmr.org and the Cagayan de Oro-based daily newspaper, Sunstar. He was a social activist and was once the secretary general of Bagong Alyansang Makabayan (BAYAN) Lanao in 2005-2006 before becoming a humanitarian worker for Accord and CARE Nederland in the TS Haiyan-affected areas in Eastern Visayas.