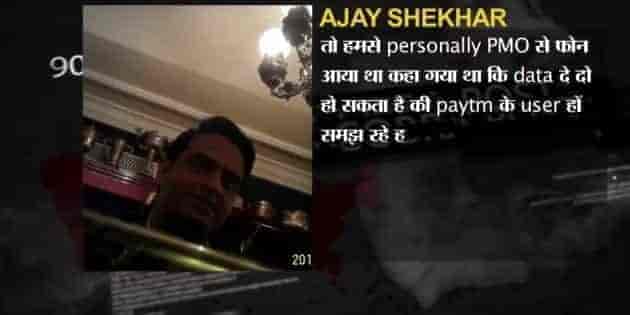 In a major sting operation by online media house, Cobrapost, it is found that Paytm mobile-app utility payment company shared personal data of its users to a political party on the request from PMO during stone throwing protests in Jammu and Kashmir.

The Cobrapost writes that “the senior vice president of the mobile-app utility payment company candidly admitted his association with the top brass of both the RSS and the BJP.”

“When the stone-pelting stopped there in J&K, I personally got a phone call from the PMO. They told us to give them data saying maybe some of the stone-pelters are Paytm users,” Shekhar allegedly told the under cover journalist.

Since the killing of popular rebel commander Burhan Wani in July 2016, Kashmir Valley has witnessed rise in stone throwing incidents and civilian protests, which the government has been finding hard to control.

However, The Kashmir Walla couldn’t verify the authenticity of the video.