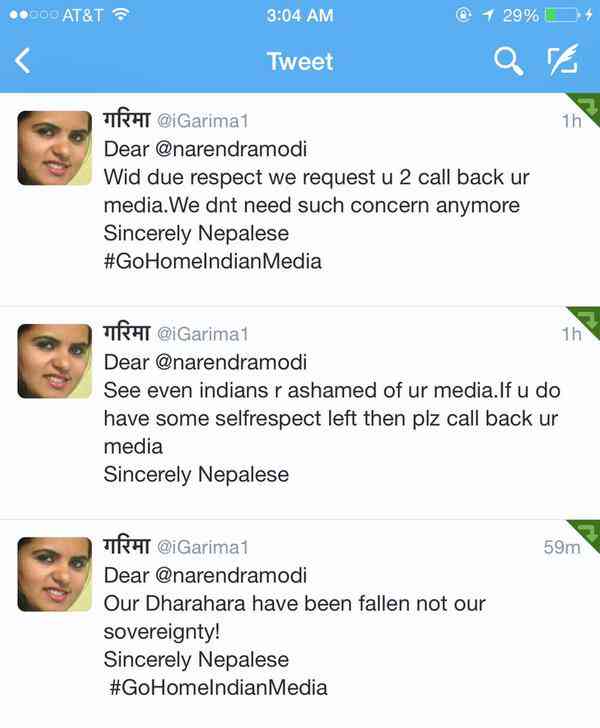 After the continuous coverage and camping in Nepal to show earthquake disaster that hit the country on April, the people of Nepal are requesting Indian media to leave now. The Twitter has been flooded with tweets ridiculing Indian media under the trend #GoHomeIndianMedia, that has been trending at top.

“As a human, show your humanity. There are enough programs in this world of television where people can see dramatic shows, family serials, horror shows and nonsense reality shows. You do not have to add more at least in this time of crisis,” read a letter from Nepal to Indian media.

Below are a few tweets picked from the trend:

#Media shows that India is the only country to help Nepal. But Couldn’t find India even in Top 14! #GoHomeIndianMedia pic.twitter.com/f38b4t6RYW

We Nepali are independent since the country named Nepal. Try to learn the history about Gurkhas. Give and take respect.😡 #GoHomeIndianMedia — जंगी निशान (@thejangiinisaan) May 3, 2015

I dearly appreciate the support of Indian people, you guys have been blessing for us but your media is totally rubbish. #GoHomeIndianMedia

This indian journalist are just similar to unwanted vultures creating a mess.#GoHomeIndianMedia — Help Nepal (@Human_byheart) May 3, 2015

#GoHomeIndianMedia Instead of talking about sending relief goods, Indian Media should show what their Army does! pic.twitter.com/g9jYUfddwU

I feel for Indians. We couldn’t bear Indian media for 6 days and Indians have to deal with them everyday. #GoHomeIndianMedia — Kanchan Shrestha (@mekanchan) May 3, 2015

Nepalis are more terrorized by Indian Media than the devastating earthquake itself! #GoHomeIndianMedia pic.twitter.com/gnnQpKNFjG

Irony. Today is world press day. And Indian media is getting its due credits. #GoHomeIndianMedia — Saleem (@Angry_Hassan) May 3, 2015

If you are fool and know how to be a nonsense, be fast join Indian media. You have bright future there #GoHomeIndianMedia

Dear @narendramodi ! A message for you from an upright Napalese woman #GoHomeIndianMedia Shameless pic.twitter.com/PPZkecaVBe

#GoHomeIndianMedia you all deserve gorkhalis kick and khukuri!! run before we make you run like street dogs! — UDeep (@ujjwaldt) May 3, 2015