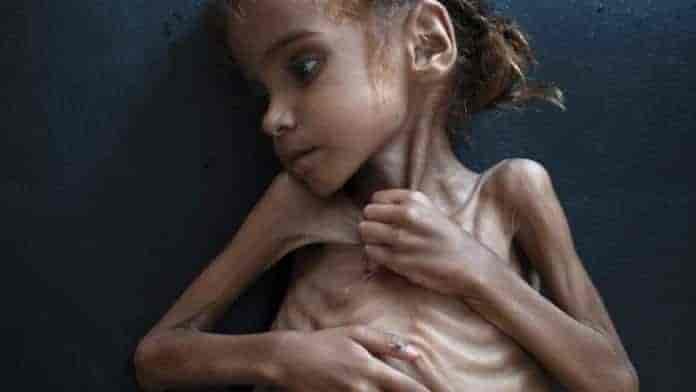 Amal Hussain, a seven-year-old girl who became face of the famine of yemen after New York Times photograph last week brought new attention to the thousands upon thousands of children suffering the dire consequences of Yemen’s devastating war, has died, according to the newspaper, Al Jazeera reported

The child died of malnutrition in a refugee camp in northern Yemen, her family told the Times on Thursday.

“My heart is broken,” Mariam Ali, the girl’s mother, was quoted as saying.

“Amal was always smiling. Now, I’m worried for my other children.”

The Times also quoted Mekkia Mahdi, a Yemeni doctor who had treated the girl shortly before her death, as saying: “We have many more cases like her.”

The heart wrenching photograph that exposed Saudi war on poorest country of middle east clicked  by Pulitzer Prize-winner Tyler Hicks, which showed the emaciated girl lying on a bed inside a mobile UNICEF clinic in Aslam, touched a nerve with people across the world and sparked an outcry over a crisis that has been called by the United Nations the worst in the word.

Speaking to The Takeaway radio programme earlier this week, described how photographing Amal was “difficult” and “heartbreaking” but also “important.”

“She really sums up how tragic and how bad the malnutrition and the starvation have really become in Yemen,” the photographer said.