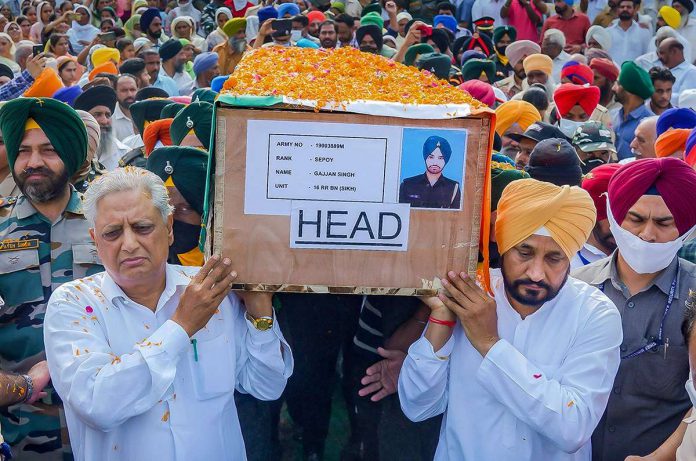 Wife of army personnel killed in Rajouri has appealed to the government that ‘if they (militants) want to get Kashmir separated from India, fulfill their aspiration.”

“I would like to appeal to the government that if they want to get Kashmir separated from India, fulfill their aspiration. Why are you getting sons of others killed? You are sitting on the chairs (power) and have no concern about the life of others’ sons. Bother their life a bit. They are also sons of any mother. These sons are dying frequently, but you don’t care”. The newly married grieving wife of Sikh soldier Gajjan Singh said according to a media report.

Singh was killed on 11 October in a gunfight with militants in Poonch district.

Harpreet Kaur added, “However, the governments don’t listen to us. They only want chairs (power), nothing else”.

“I am very proud of his sacrifice. He often shared his wish to attain martyrdom. On hearing these words, I used to ask him to transfer his duty to a safe place. But he was adamant to make the sacrifice. He told me that I would be proud of him. I did not know he would leave us”, she said while speaking to the media, a pall of gloom descended on the Pachranda village in Ropar district of Punjab.

He tied knots with Harpreet Kaur in February this year. Pertinently, the farmers’ protest against the three agricultural laws was at its peak at that time. Pained to see the plight of his brethren squatting on roads during winter, Gajjan expressed his solidarity with the protesting farmers, carring the flag of the Kirti Kisan Morcha.