The Kashmir Walla
Support Us
In-DepthBusiness

From Willow to Poplar: Downfall of Kashmir’s bat industry 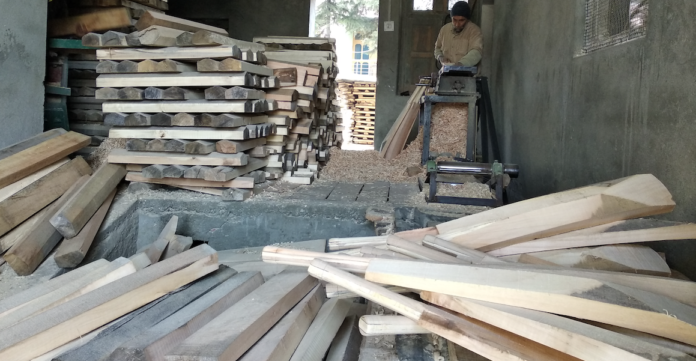 From gully cricket to international, the Kashmir willow made bats have swung balls around the globe. In Sachin Tendulkar’s fame hall to valley’s remote areas, the willow has shaped not only players but childhood. Though, soon, the Russian poplar invaded the valley as an alternative to the native willow and changed the entire business of industry owners.

Twenty-five kilometers away from the nucleus of the valley, Srinagar, on NH1-A in Hulmul area near Sangam, rusts the Kashmir’s oldest bat industry. Talking to The Kashmir Walla, owner of the factory, Abdul Rashid Dar told that he has been associated with the industry from 1971, “almost 50 years now.”

After realizing Russian Poplar’s capability of growing faster than its counterpart, the raw-material providers started growing it, and with the immediate effect, it affected the existence of the valley’s native willow. With its downfall, Kashmir’s bat industry also went down the slope. In contrast to 30-years of harvest period of native willow, Poplar only takes a decade.

The low availability of willow and the cheaper price of poplar has changed the market arena. This hiking of decreasing supply trend of the raw material presents a dilemma that how long will the industry survive in Kashmir.

Mr. Dar, owner of Dar Sports in south Kashmir’s Anantnag district, claims of being the pioneer in this industry. He admits that due to the hike in rates and non-availability of raw material, the producers have started using poplar as an alternative of willow, but the end product is not as good and fine as willow bat was.

“This industry was started by my father, Abdul Sattar Dar, in 1947 and since then it slowly got expanded in this belt,” said Mr. Dar. “At back then, the willow was available in bulk, but following the increase in the industries, the raw-material went down.”

He also attended a meeting in April 2018 with World Bank in New Delhi to raise and discuss the major issues faced by this industry. He said, “by using almost 2000 feet of furniture, they used to produce 300 bats per day, which would provide a livelihood in turn to 30 people.”

Talking to The Kashmir Walla, the working president of Bat Manufacturing Association, Mohd Amin Dar said, “Kashmir has around 350 bat manufacturing units, and each unit produces 15 thousand bats per year; and because they are registered under the handmade tools, due to laws made earlier, we aren’t able to set up modern machines in these units.”

He added that the plea to convert the area (from Awantipora to Dunipora, Sangam) as an industrial area is under consideration by the government, which will eventually help the industry to grow.

Though the government had supported the industry and gave two government sports complexes with concerned machinery, the conflict in the Kashmir valley affected it, and both were occupied by the forces. “Bijbehara Sports Complex was occupied by security forces in the early 1990s and displaced hundreds of small scale unitholders, including 43 cricket bat manufacturing units. The CRPF vacated the complex in October 2018 and handed it over to the SICOP,” said Mr. Dar.

Apparently, it was later freed from the captivity, but now, the machinery doesn’t function properly.

A senior officer from the District Industries Centre, Anantnag, requesting anonymity said that the World Bank will renovate the common facility center. “We have also approached the government in this matter and the area from Awantipora to Sangam will be declared as Industrial area with 500 meters of width on both sides of the highway,” he added.

Though the business if going down, he alongside his 5 brothers, is trying to sustain on it. “If the government takes appropriate measure, and allow us to grow English willows, then thousands of people can get their livelihood from them,” said Mr. Dar. At present, the entire belt provides jobs to at least 15 thousand people, “which can improve if the government is willing to boost the industry.”

Addressing the issue of running low on the willow trees, Mr. Dar and his brothers also tell that they have planted almost 10 thousand willow trees in their own land to provide the raw material for their own industry. But, as it ‘grows’, the fellow industry holders are not motivated by such time-consuming plantation and practice only poplar plantation, which is ready-to-go in 10 years.

Another local, Naveed Azad says that the Jammu and Kashmir government can provide land on lease to the bat manufacturers in Bijbehara area, then, not only these industries could be saved, but one of the endangered species of the trees – willow – would also be preserved.

As per Dar brothers, they are determined to find a solution to this problem, “which is not only associated with them, but with the name of Kashmir as well.”

Comparing the situation of the industry with England, Mr. Dar said that the (English) people plant 10 trees to cut one, “but that kind of motivation is lacking in Kashmir.”

After a meeting with World Bank committee, who have assured them of the help they need, Dar brothers hope that there would be a change in the industry with the re-introduction of English willow, “as it holds high name.”.

The concerned authorities are also in conversation with the Sher-e-Kashmir University of Agricultural Sciences and Technology (SKUAST) Kashmir regarding the modernization in the willow plantation. However, Mr. Amin Dar said that if the government provides incentives to the willow planters, it will motivate them to plant eco-friendly willow than its counterpart, which will, in turn, boost the availability of the raw material.

A passionate cricketer from the locality, and a bat enthusiast, Naveed said, “Kashmir is blessed with so many qualities by Allah, but our rulers are not paying attention to these great assets of nature, and due to this, we are losing our Identity.”

Naveed moves ahead and checks out the bats available in stock, and smirk while whispering about the downfall of the industry, “it is not only government’s failure, but also the unwillingness of Kashmiris.” His main concern is that the quality of the bat is not what it used to be, and took home a poplar made bat.